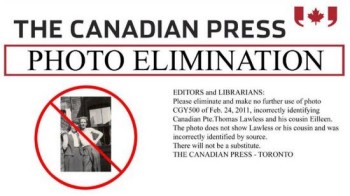 The Toronto Star, the Canadian Press and the Veterans Affairs in Ottawa all wrongly identified a photograph of a man and a woman as being Private Thomas Lawless and his cousin during World War I.

Because of the error, the Canadian Press has killed the photo from its service.

The photo was wrongly identified as Lawless by the Veterans Affairs, from whom the Canadian Press got the photo and published it back in 2011 with a story on Lawless’ remains being found in France.

At that time, the newspaper published the photo and the report of his remains, Toronto Star public editor Kathy English reported.

But when the Star published the photo again this month reader questioned its authenticity. They pointed out that “the hair and clothing of both the man and woman [in the photo identified as Lawless and his cousin] do not appear consistent with the Great War era.”

English said this was the first time anyone raised doubts about the photo; it turned out that they were right. Toronto Star reporter Oakland Ross discovered the photo wasn’t actually of Lawless, noting that the Department of National Defence confirmed “The photo is not Thomas Lawless. We have no photo of Thomas Lawless.”

Following suit, the Veterans Affairs said the photograph was not of Lawless and that it was unpublishing the photo from their website. It turned out that the Department of National Defence had wrongly identified Lawless as the subject of the photo and issued a correction but no one found out about it until this month when the Star republished the photo.

“EDITORS and LIBRARIAN: Please eliminate and make no further use of photo CG500 of Feb. 24, 2011, incorrectly identifying Canadian Pte. Thomas Lawless and his cousin Eilleen. The photo does not show Lawless or his cousin and was incorrectly identified by source. There will not be a substitute. THE CANADIAN PRESS – TORONTO.”

The Star also published a correction along with the Aug. 8 article that accompanied the re-publication of the photo wrongly identified as Lawless.  The correction, posted in the caption of a slideshow where the image once appeared, reads:

“Correction – Aug. 15, 2014: The fourth photo in this slideshow has been removed. The photo did not show Pte. Thomas Lawless and his cousin Eilleen and was incorrectly identified by source.”

iMediaEthics has written to English to ask what other, if any, corrections the paper has published related to this photo error.