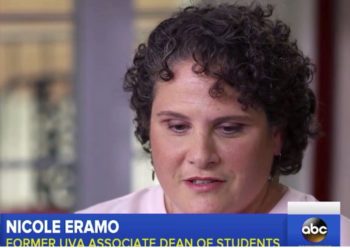 The first libel trial against Rolling Stone and reporter Sabrina Rubin Erdely for the reporting “A Rape on Campus” is underway. Last year, the University of Virginia’s associate dean of students, Nicole Eramo, filed the lawsuit against the magazine for its story reporting on the alleged gang rape on campus of a student identified as Jackie. The Rolling Stone story has since been discredited and retracted. Eramo sued because she said the article “destroyed her credibility, permanently damaged her reputation and caused her emotional distress.”

On Oct. 20, Erdely testified that she hadn’t been concerned about the changes in her source Jackie’s story because “it takes trauma victims time to come forward with all the details” and because she thought Jackie was coming “to terms with the rape.” Erdely admitted she had “the full name of one of Jackie’s friends who supposedly saw Jackie shortly after the alleged rape,” the Associated Press reported.

“But during months of reporting, Erdely was confronted with conflicting information about how the tale was relayed to Jackie’s friends. She found that the number of assailants wavered. And she noticed that Jackie had changed aspects of the account. But Erdely never questioned her credibility, and she testified in federal court that she never confronted Jackie about the discrepancies.

“Erdely said she attributed the shifting details of the young woman’s tale to the trauma she experienced. Erdely had written extensively about victims of sexual assault and said they often change the details of their stories.”

“I’m never going to be where I was on Nov. 18 of 2014,” Eramo told ABC News this month before the trial began. “But I can hopefully recognize that person again.” Her lawyer, Libby Locke, told ABC News, “It portrayed her as a callous, indifferent administrator who became a false friend of Jackie in order to coddle her into not reporting her sexual assault beyond the bounds of Dean Eramo’s office.”

While “Jackie” did not testify, her April deposition was played in court Oct. 24, ABC News reported. Jackie said in the deposition she thought her claims about being allegedly gang raped “were not going to be published” and that she “felt like I was getting a lot of pressure from a lot of different people.” She said that she she didn’t want to be featured in the article as of a few weeks before publication.

“As this trial begins, it’s important to remember that Rolling Stone and our reporter Sabrina Rubin Erdely firmly believed in the credibility of Jackie, as did UVA and Dean Eramo, when the Article was published,” Rolling Stone said in a statement reported by CNN. “We made journalistic mistakes with respect to Jackie’s story, and we have learned from them. Up until now, only one side of the story has been presented.”

“Dean Eramo’s lawyers are attempting to shift the focus of her lawsuit in the media to Rolling Stone’s reporting errors surrounding Jackie, which is not the basis of her lawsuit. In fact, a multiyear review of sexual violence at UVA by the U.S. Department of Education found Dean Eramo to have specifically contributed to the university’s hostile environment for sexual assault victims — an assertion much more critical of Eramo than any statement from the article. The depiction of Dean Eramo in the article was balanced and described the challenges of her role. We now look forward to the jury’s decision in this case.”

Rolling Stone did not respond to iMediaEthics’ inquiry last week about the trial.

Earlier this month, Rolling Stone unpublished a story about professional basketball player Derrick Rose, his trial for rape,  and the National Basketball Association. (Since the article first appeared, Rose has been cleared of that charge).