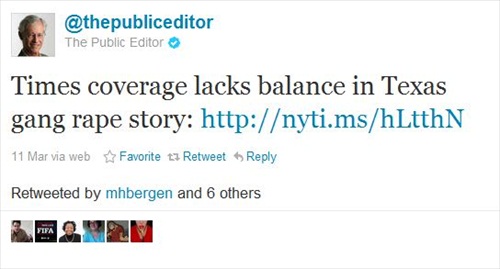 In the March 9 story (see here), Times reporter James C. McKinley, Jr. reported the charges against the 18 men and boys accused of “participating in the gang rape.”  The alleged rape occurred Nov. 28.  At least 18 people have been arrested, but attorney James Evans reportedly told the AP as many as 28 people may be charged. Evans is defending four of those arrested.

The story was criticized for having one-sided sourcing and reporting in a way that it blamed the victim and sympathized with the accused.  For example, McKinley reported that “residents in the neighborhood” where the alleged rape occurred, described the victim as “dressed older than her age, wearing makeup and fashions more appropriate to a woman in her 20s.”

The accusations of unbalanced reporting also included McKinley’s reporting sympathy and concern for those accused in the gang rape, but not the victim. He reported:

“The case has rocked this East Texas community to its core and left many residents in the working-class neighborhood where the attack took place with unanswered questions. Among them is, if the allegations are proved, how could their young men have been drawn into such an act?”

Also, the vague sourcing of “some” of those residents, commented that the victim “would hang out with teenage boys at a playground.”  And for many, that description suggests that the victim may be to blame.

And, a neighbor, Sheila Harrison, is quoted as saying that the scandal has “destroyed our community” and that the accused “have to live with this the rest of their life.”  Harrison is also quoted as suggesting blame for the mother in addition to the victim, saying “where was her mother? What was her mother thinking? How can you have an 11-year-old child missing down in the Quarters?”

McKinley also quoted the school district’s spokesperson and unidentified “authorities” and “police” in his story, but notably not the victim’s family or anyone that appeared sympathetic for the victim or the victim’s mother. Poynter’s Latoya Peterson criticized McKinley for not noting if he tried to contact for comment many of the key players in the story like the girl’s mother or suspect’s family members.  Peterson noted:

“There are no direct quotes from investigators, attorneys, or child services — all parties who are currently involved in preparing the case or dealing with the child’s well-being. In fact, the only person of authority quoted in the piece is Stacey Gatlin, the spokesperson for the Cleveland school district.”

Peterson and the public editor pointed to the Associated Press’ story on the gang rape for doing a better job providing balance.  The AP reported contacting Child Protective Services, the school district spokesperson, the district attorney and the police.

Brisbane agreed with readers’ complaints that the story was unfair to the victim. “The story dealt with a hideous crime but addressed concerns about the ruined lives of the perpetrators without acknowledging the obvious: concern for the victim,” Brisbane opined.  “These elements, creating an impression of concern for the perpetrators and an impression of a provocative victim, led many readers to interpret the subtext of the story to be: she had it coming.”

The Awl called Brisbane’s reaction “as strong a condemnation as you’ll get from the Times public editor.”

Change.org started a petition calling on the Times to apologize for its story.  As of March 14, the petition had more than 44,000 signatures.

The New York Times addressed criticism of the story and defended it in a statement last week, Brisbane noted.  The statement read:

“Nothing in our story was in any way intended to imply that the victim was to blame. Neighbors’ comments about the girl, which we reported in the story, seemed to reflect concern about what they saw as a lack of supervision that may have left her at risk.”

“As for residents’ references to the accused having to ‘live with this for the rest of their lives,’ those are views we found in our reporting. They are not our reporter’s reactions, but the reactions of disbelief by townspeople over the news of a mass assault on a defenseless 11-year-old.”

Interestingly, Brisbane didn’t note any response from the reporter behind the story, McKinley, but he did cite Times’ standards editor, Philip Corbett, who explained to Brisbane that the March 9 story “focused on the reaction of community residents and that there was no intent to blame the victim.”

Corbett is quoted as saying “I do think in retrospect we could have done more to provide more context to make that clear.” Brisbane also noted that the Times is working on a follow-up story.

Poynter’s Latoya Peterson commented that “The purpose of journalism is to illuminate issues, provide context, and produce fair coverage about the incidents that occur in our world. The New York Times piece does not meet this standard.”  She further labeled the March 9 story “shoddy journalism, presenting less than half of a story, providing no context for what has happening, and focusing on trivial details to the detriment of the full story.”

“What makes it more egregious is that the Times linked directly to the better sourced, better framed Chronicle article — yet still produced a piece which upheld both class bias in reporting and what feminists term ‘rape culture’: a cultural norm that encourages blaming the victim of sexual assault or rape while exonerating the perpetrators.

Jezebel also commented on Brisbane’s column, and noted a Philadelphia Weekly opinion article on the careful selection of words when reporting on rapes, highlighting that the phrase “have sex with” implies consent.

StinkyJournalism has written to McKinley asking for comment and if he attempted to contact attorneys and the victim’s family. We will update with any response.