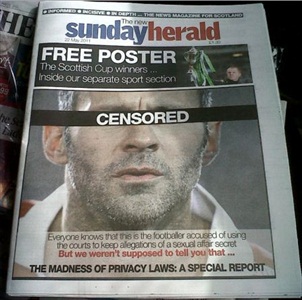 The Scottish Sunday Herald ran a photo identifying the man who reportedly took out a super-injunction against the UK press. (Credit: indymedia.org.uk, screenshot)

A Scottish newspaper has published a picture of the married soccer player alleged to have had an affair with Imogen Thomas, a former Miss Wales and contestant on the popular reality TV show Big Brother. iMediaEthics previously wrote about the controversy in the UK over the UK Sun’s fight to name the man.

A court-ordered super-injunction sought by the soccer player prevented UK newspapers from naming the soccer player.  Thomas has stated she couldn’t afford to pay £50,000 to get an injunction and therefore backed the newspaper’s call to name the player. But the court order was upheld and UK press has been banned from naming him.

The international media has named a player.  Likewise, a name has circulated on social media.

What is a Super-Injunction?

Metro.Co.UK, in a May 9 report, “What is a super-injunction?,” explains: “In its purest form, a ‘super-injunction’ refers to a legal gagging order which not only prevents the media from reporting the details of a story, but also forbids mention of the existence of the injunction itself.” Read more here.

According to the Guardian, since the soccer player’s injunction on the UK press doesn’t apply to the Scottish press, the Scottish newspaper published the man’s photo and claimed it was “unfair” that he was able to get the courts to keep his name out of the press.

UK newspapers like the Daily Mail and UK websites like Journalism.co.uk did not name which newspaper published the photo in violation of the injunction citing legal restraints.  ITN News stated that the newspaper in question is the Sunday Herald.

The Sunday Herald itself posted a story by the Press Association reporting that the Herald is the newspaper to identify the soccer player.

The Herald reportedly ran a front-page photo of the man alleged to have the affair “with a black band across his eyes and the word ‘censored’ in capital letters.” According to the Guardian, “the player is easily recognisable.”

However, as the Guardian reported, the Herald didn’t post its editorial and photo on its website. The print version of The Herald, is not published in England, but SJ is checking if it can be found on its newstands.

The newspaper explained that it was identifying the man because “we believe it is unsustainable that the law can be used to prevent newspapers from publishing information that readers can access on the internet at the click of a mouse.”

The newspaper added that it wasn’t confirming that the man pictured committed “any misdeed” but rather just identifying him as the person “linked to a court superinjunction.”


Social media also circulated a player’s name in connection with the affair.  But in response, the Guardian reported that an unidentified soccer player — logically, the same player who sought the injunction to keep the media from naming him in the Thomas affair — has filed a suit against Twitter and those “responsible for the publication of information on the Twitter accounts.”

As the Guardian explained,

“Earlier this month, an unknown person or individuals published the names of various people who had allegedly taken out gagging orders to conceal sexual indiscretions on a Twitter account. The account rapidly attracted more than 100,000 followers.”

One of the complications with these UK injunctions is that often it can’t even be reported who took out the injunction or that an injunction even exists.

A UK justice slammed Twitter last week, the Guardian also reported.  The judge, Lord Judge, stated that “modern technology was totally out of control” and approved that unnamed soccer player’s suit to find out who violated the injunction ruling by posting the soccer player alleged in the affair’s name.

Meanwhile, Thomas has reportedly announced she may sue the man if he “publicly repeats his courtroom accusations that she attempted to blackmail him,” according to Digital Spy.

UPDATE:  05/23/2011: 12:53 PM EST:  A UK parliament member, John Hemming, named the soccer player in question during  a Parliamentary Commons debate, the Scottish Herald reported.  He also named a journalist who reportedly may be imprisoned for breaking the injunction.

Hemming was able to legally name the soccer star because of a loophole in the law that lets lawmakers “speak freely” under Parliamentary privilege without getting in legal troubles. Earlier this year, MP John Hemming discussed an injunction obtained by banker Sir Fred Goodwin by using Parliamentary privilege.

We also added above a reference  to Meeja Law’s reporting on super-injunctions. Hat Tip: Judith Townend