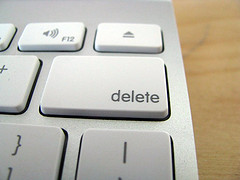 A CLEAN SLATE FROM THE GOVERNMENT...BUT NOT FROM ONLINE NEWSPAPER ARCHIVES: Many citizens are asking newspapers to un-publish their police records. (Credit: TheTruthAbout, Flickr)

Thanks to the Internet, a simple Google search of a person’s name can now quickly turn up that police record  you thought was dismissed…and your neighbors and employer knew nothing about.

It is one thing to publish police records. However, it’s quite another when newspaper append no follow-up reports or updates with the result or dismissal of the charges.

iMediaEthics wanted to know more about how news organizations handle such requests to change or remove police records from the person in question. What do editors think of such unpublishing?

iMediaEthics wrote about the topic last week and began with a report by Toronto Star public editor Kathy English who, last fall surveyed 110 editors about their newspaper’s policies and how they handle people’s often desperate pleas to remove content about them.

From conversations or e-mails with iMediaEthics, editors working at The Batavian, Oswego County Today, Hartsville Today, The Toronto Star, and The Messenger shared their reasoning on unpublishing and publishing police reports in the first place.

In line with Kathy English’s report, it turns out that overall, editors aren’t too keen to delete or remove published content.

As Howard Owens, publisher of The Batavian, wrote in an e-mail to iMediaEthics, “I have a typical journalist’s/historian’s abhorrence for altering the record.”

But, instead of deleting or removing reports, the editors iMediaEthics spoke with are much more welcoming of the idea of updating or appending a corrective note.

If it’s proved that all charges have been dismissed, Bullard said Oswego County Today will remove the blotter item.  If an item is inaccurate, the person has pleaded to a lower charge and wants it noted, or information in the blotter puts someone at risk, Bullard said the paper will change the record.

“We’re happy to amend the record if someone is accused of something and provides evidence or the means to find the evidence,” Bullard said.

Lisa Chalian-Rock, an editor at The Messenger, a Hartsville, S.C. newspaper, wrote that the paper will correct any errors, but the Sheriff’s Office or Detention Center is responsible for telling the newspaper.

“If a person is cleared of charges, they can bring the court/police documents to us, and we can then run a notice that charges were dropped,” Chalian-Rock wrote. “Or they can get the Detention Center or Sheriff’s Office to send us that information. However, in my experience, no one ever does this often because they don’t want their names to appear in the paper again in relation to an incident.”

Owens wrote “I think it’s important to weigh each individual case and handle them as in our best judgment seems appropriate to the circumstances.”  He continued that he “wouldn’t call it a policy as much as a practice — if people call me and ask for a take down or revision, I tell them to send me an e-mail with a request and details. None have ever taken me up on that offer.”

Doug Fisher, a senior instructor at the University of South Carolina and founder of the community news project Web site Hartsville Today, wrote on his blog in January about both English’s study and one that he, Larry Timbs and Will Atkinson wrote in 2007, “How America’s Community Newspapers Handle (Or Don’t Handle) Their ‘Digital Attics’.”

The study concluded that “the ethical, legal, and sociological implications of long-term, wide accessibility of digital versions of newspapers’ stories, photos, and other elements warrant additional research.”

Fisher’s blog noted “a bit of softening” from editors in their handling of unpublishing requests. Also, Fisher noted that where his report found that two-thirds of his survey group had no policy or didn’t know of a policy, English’s survey two years later found about half her survey group didn’t have a policy intact.

Fisher told StinkyJournalism, “I think instead of taking it down I can understand why the method of operation would be to put in an editor’s note instead” explaining what editors had removed or changed.

The Toronto Star’s Kathy English wrote in an e-mail to iMediaEthics:

“The Toronto Star rarely unpublishes reports of police charges (or anything else) but we do think it is vitally important to update any articles reporting charges which are outdated because charges have been dropped, those charged have been acquitted etc.  Given the permanency of the Internet, and the harm such reports about police charges can do to individuals, I think fairness demands that we “right the record” and not leave incomplete or inaccurate information online.

She also wrote that several times in the past few months she has received requests for an online record to be changed or removed.  “Each time, I verify the information the subject brings to my office through public records and interviews with lawyers and then append a note to the original articles to indicate that the charges have been dropped on whatever date –and add any other information I think is relevant and fair to the person who had been accused,” English wrote.

Editors also told iMediaEthics they publish police reports to give the public an idea of what the police are up to everyday.

As Owens wrote, “An arrest isn’t just about the individual arrested.  It is also a key part of a process of what the tax-payer funded police force does. Reporting those arrests is a way of informing the public of its tax money at work.  There is also the aspect that the power of the state is significant.  Keeping tabs — by keeping the public informed — on police activities helps, I believe, check abuse.  I think just knowing that there is media out there paying attention — listening to the scanner, reporting everything possible of their activity, helps act as a check and balance.”

Bullard agreed with Owens.  Publishing the reports is “intended to be an accurate reflection of police activity as reported by the police.”  To counter police language, though, the policy of Oswego County Today is to call everything a ticket. “It doesn’t always happen but that’s what we try very hard to do,” Bullard wrote to iMediaEthics.  “And we’re happy to make the change if someone notices it.  The reports come to us with the wording “arrested” in every case.  In that scenario, it is almost impossible to guarantee that “every” (the key word in your question) instance is caught and changed.  Fortunately, and this is important, the lack of change does not render the item inaccurate.  These are arrests.”

But, as Owens said, “In the meantime, the original arrest is news.  We cannot not report it.  We also can’t follow every case.  So this is the system we have, and if somebody needs to clear their name, they need to be proactive about getting that ball rolling.”

Concerning the future of this issue, a few editors suggested altering the policies of just how much information is published in police reports.

Fisher noted he’s seen a lot of publications leaving out the names of the person in the police report.

“We have always had these records…police blotters, etc., but they’ve been stuck after they appeared in the paper in a dusty file cabinet,” Fisher said.  “It wasn’t something that could easily haunt you for the rest of your life, but now once you put something online…it’s in someone’s cache somewhere and it’s there forever and it keeps cropping up.”

While Bullard noted that newspaper archives and police records are still available and still may be through subscription services like LexisNexis, the outward facing data availability the Internet has provided has allowed the public to be aware of the records that could be searched.

“You should know that we are likely to begin taking down police logs from the public side of the website about 60 days after first publication,” Bullard wrote Monday to iMediaEthics.  “We’ve struggled with this issue of public access vs. long-lasting effects for a long time and we were discussing this issue when you contacted us.  I’m beginning to believe that a 60-day access policy strikes the right balance between the public’s right to know and the long-term harm that could occur because of an old and minor non-violent offense.  Significant crime-related issues are written up separately and would not be affected by this.”

English wrote “rather than only talking about whether we should ‘unpublish’ or not, I think we need to consider what police blotter items we publish, –what is news– whether names of those charged must be use when reporting on minor incidents and/or whether articles reporting minor charges do indeed have to remain part of the digital archive for all time. Having talked to several people who have been charged and acquitted, I do understand why they want these news reports to disappear.”

In order to change something a newspaper has published, it’s important to be proactive, by contacting the publication and providing them with proof that there has been a change to the record.  And, recognize that these matters seemingly are handled on a case by case basis, and editors may handle each case differently.