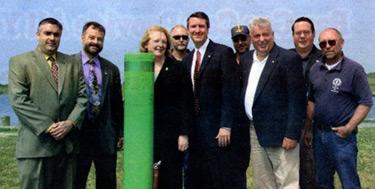 South Shore Press says photo doctoring okay...as long as you are adding to the image, and not removing information. The Press published the above faked photo, July 8. Brookhaven Town Councilman Keith Romaine, second man from the right, was added via Photoshopped. The weekly admits they combined two different images.

Fred Towle Jr, director of sales and marketing for the weekly newspaper, The South Shore Press, told The Southhampton Press this week  that it’s okay to doctor photos as long as you are adding stuff and not removing information from the image.

The SH Press writes that Towle Jr. “a former Suffolk County legislator who resigned from his county post in 2003 after pleading guilty to receiving bribes in office, acknowledged this week that the paper altered the photograph. He defended the practice, noting that he had received competing press releases and photographs from both Mr. Romaine and Ms. Browning and was attempting to combine the two.”

Towle told The Press that “He saw nothing wrong with adding Mr. Romaine to the photograph, ‘Yes, we did it,’ he said. ‘It’s not like we intentionally removed someone from a photo—that would have been questionable.’ ”

The fake photo, according to the SH Press, “depicts Brookhaven Town Councilman Keith Romaine as being present at a July 2 news conference at Smith Point County Park that he did not, in fact, attend. It appeared in the July 8 issue of The South Shore Press, a weekly newspaper ” in Long Island, New York.