Supreme Court Says Julian Assange to be Extradited, but has 2 weeks

Supreme Court Says Julian Assange to be Extradited, but has 2 weeks to Appeal 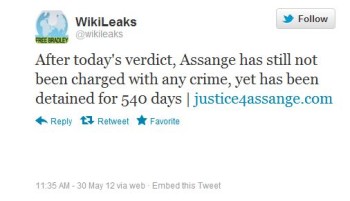 The UK Supreme Court ruled 5-2 that WikiLeaks founder Julian Assange must be extradited to Sweden for questioning related to “accusations of sexual assault and rape” as early as June 13, The Guardian reported.

As we have written, in November 2010, Swedish public prosecution director Marianne Ny said “an international arrest warrant will be issued” for Assange over the accusations.  In early December, Assange turned himself in to police.   In February 2011, UK judge Howard Riddle called for Assange to be extradited.  In July 2011, he appealed to the High Court, which rejected his appeal in November of last year. In November and December, he asked for the UK Supreme Court to hear his case, which it agreed to do.

Assange may appeal within 14 days under the grounds of “to challenge a central point of the judgment on the correct interpretation of international treaties.”    Also, he could appeal to the European Court of Human Rights, according to The Guardian.

According to the Washington Post, Assange getting the two-week Supreme Court appeal period was “a surprise intervention.”

The Guardian noted that “This is the first time the supreme court has agreed to receive a challenge to one of its rulings.”  The Supreme Court president, Nicholas Phillips, said the case “has not been simple to resolve,” but the extradition “has been lawfully made,” the Associated Press reported.

Assange could appeal on “the correct interpretation of international treaties” — over whether “a public prosecutor was a ‘judicial authority'” who could file an  arrest warrant against Assange, The Guardian explained.  The Christian Science Monitor added that Assange’s defense said the UK calls for a “judge or court” to issue warrants.

Assange wasn’t present in court reportedly due to traffic, the Los Angeles Times and the Guardian reported.

Supreme Court Says Julian Assange to be Extradited, but has 2 weeks to Appeal