The Impossible Measure of “Dimness” 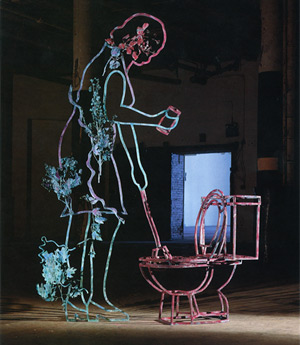 If the Washington Post uses low standardized test scores as evidence for innate female “dimness,” is the same argument for African-Americans’ inferiority far behind?

This is not meant to be just a provocative question. Washington Post columnist Charlotte Allen’s article “We Scream, We Swoon. How Dumb Can We Get?” (March 2, 2008) actually employs logic used in debunked 19th century science that argued larger brain size “proved” the intellectual superiority of the “Caucasian Race” to support her claim of women’s inherent inferiority.

Allen writes, “The theory that women are the dumber sex – or at least the sex that gets into more car accidents – is amply supported by neurological and standardized-testing evidence. Men’s and women’s brains not only look different, but men’s brains are bigger than women’s (even adjusting for men’s generally bigger body size).”

What Allen does not mention is that the pseudoscience corelating brain size to intelligence – a study known as craniometry – began in the 19th century with researchers Samuel George Morton, Louis Agassiz, and Paul Broca.

The late, great authority on the topic, Stephen Jay Gould (full disclosure; my late husband) dealt with this issue of biology-as-destiny years ago in his seminal book, The Mismeasure of Man. In part, his book showed how Morton manipulated the results of his research to support his biases that Native Americans were “slow in acquiring knowledge” and that “the Negro” was “indolent.”

The reality is that if you treat any person—male or female—as “dumb” or a “bad driver,” you can pre-determine diminished performance through self-fulfilling prophecy. Where is the line drawn between nature and nurture?

In terms of intelligence, society (“nurture”) can keep a young woman from realizing her full potential by discouraging education, funding and sending her negative social cues – i.e. through respected news outlets like the Washington Post – slandering her as “dumb” and inherently not as good as males.

As a sculptor, I called attention to how even New York City sends these damaging messages to girls in how public art is commissioned. Of the hundreds of monuments erected throughout the city, only three depict real women: Gertrude Stein, Eleanor Roosevelt, and Joan of Arc. The giant Alice in Wonderland is hardly a role model.

The truth is that scientists have no way of determining exactly which plays a greater role in shaping intelligence – education or genetics. It is impossible to measure how messages like this affect a young woman’s intellectual choices or performance.

When such a measurement can be done, Ms. Allen, then get back to me. Meanwhile, our moral and social duty is to create an even playing field for all people. We can never tell in advance who will be the African-American or girl genius, until all individuals are encouraged to excel in advanced mathematics or the fine arts.

Ms. Allen’s clearly projects her own self-loathing on to the rest of us when she writes, “Then we could shriek and swoon and gossip and read chick lit to our hearts’ content and not mind the fact that way down deep, we are [as women, clarification mine]… kind of dim.”

She describes successful women in a hostile and patronizing tone, writing, “Yes, they can do their jobs and do them well, and I don’t think anyone should put obstacles in their paths. I predict that over the long run, however, even with all the special mentoring and role-modeling the 21st century can provide, the number of women in these fields will always lag behind the number of men, for good reason.”

And of course, she also resorts to a familiar stereotype by saying that women excel at “tenderness toward children and men and the weak and the ability to make a house a home.” The sad truth is that society not only depicts women as “mere” housekeepers, but it also degrades women –or men–who stay at home as a domestic worker.

“In my sculpture series ‘Woman’s Work,’ I depicted large scale images of motherhood and housework in heroic size, as are our most sacred monuments. My immediate fear was that to connect myself with these public images of women’s work would somehow devalue me by association because of the lack of ‘importance’ of these roles. Was I out of my mind? Wouldn’t it be better to associate myself with career and traits that are socially valued?

“After all, there are no Nobel Prizes for housework, but there I was, with my images of women from my childhood, women I know now, and (even more threatening) the woman I am.”

If our social biases of devaluing women are nurtured, as done in Allen’s article, not only will all members of a group be treated as a faceless and diminished sum, but self-fulfilling prophecy will rule. Instead viewing individuals who happen to be girls, or people of color, as deserving of equal rights and opportunities, the belief in innate dimness will surely generate more of what we expect.

We informed Charlotte Allen by email that Rhonda Roland Shearer had published an article showing that her late husband Stephen Jay Gould had debunked craniometry “science” and exposed its racist origins.  At the end of our letter, we invited her to respond.

“I’m a great admirer of Stephen Jay Gould, but I can’t comment on research of his that I’ve haven’t read. Since he’s been dead for a few years, I’m assuming his analysis was done sometime during the 80s or 90s on the basis of crude older studies that closely pegged intelligence to relative skull measurement(craniotomy) and were very likely racist, or at least not very scientific. More recent studies rely on the more sophisticated magnetic-resonance imaging (MRI) techniques that actually allow one to “see” the brain rather than guess its size based on the size of the skull. It’s incontrovertible that men’s brains are relatively larger than women even when the measurements are adjusted for body size. One leading such study is Jill Goldstein’s “Normal Sexual Dimorphism of the Adult Human Brain Assessed by In Vivo Magnetic Resonance Imaging,” published in the journal Cerebral Cortex in 2001. There, Goldstein and her research team found that men have proportionately larger parietal lobes, which are associated with the mental manipulation of objects and relation of numbers to each other.”

Although we sent her a link to our piece, Allen confessed that she did not read it because she was too busy sorting through sometimes “obscene” emails critiquing her piece.

Had she taken the time to peruse it, she would have seen that Stephen Jay Gould (whom she professes to admire) argues that there is no correlation between brain size and intelligence. In fact, The Mismeasure of Man devotes nearly three pages to “Small-Brained Men of Eminence,” demonstrating that literary greats like Whitman and Turgenev had exceedingly light gray matter. On the other hand, he found numerous instances of “Large-Brained Criminals,” which is the title of another section of his book.

Even her own reference to Goldstein’s paper cited in her email does not prove her point that men’s bigger brains correlate to a superior intellect.  In fact, it says that the male and female participants were selected because they were of similar intelligence. The abstract of the paper reads, “The men and women were similar in age, education, ethnicity, socioeconomic status, general intelligence and handedness.”

In face of the public backlash against the article, Washington Post editor John Pomfret is already in damage control mode, claiming that it was misunderstood “satire.” “Perhaps it wasn’t packaged well enough to make it clear that it was tongue-in-cheek,” Pomfret stated. Providing a citation to prove that you’re right is not in the playbook of “kidding,” even if the “evidence” is laughably mis-selected.

In another email reply, Allen continues to defend her citation, stating, “I think the idea is that the extra male brain size goes to parts of the brain good for visual-spatial skills.”

Yet again, this is a selective misreading of her own scientific data.  Yvonne Kao, a graduate student of cognitive psychology and author of the blog “Thought Bubbles,” demolishes her arguments in her post “A Neuroscience Lesson for Charlotte Allen.”

Perhaps a scientific refutation of an ill-informed and misogynistic rant lends it more credibility than it deserves. However, Social Darwinist arguments about racial and sexual superiority have a tendency of popping up regularly in the press. The record needs to be set straight. Otherwise, internationally respected news outlets will continue to lend dusty and damaging theories undue validity.

The Impossible Measure of “Dimness”