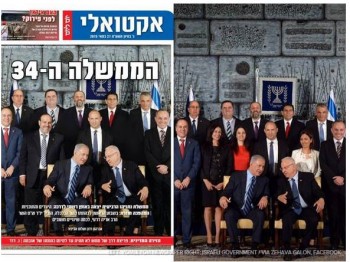 Yomleyom deleted three women from their front page photo of Israel's cabinet (left). The original photo is on the right. (Via NBC News)

See below the image (on the left) compared with the original photo (on the right).

Yomleyom’s deputy editor Rabbi Moshe Shafir told NBC News: “The Torah upholds the honor of women and their freedom.” He added, “We honor the women specifically because of their special merits and we have reservation from looking upon women as an object.”

Below see the censored image, posted on B’Hadrei Haredim’s website.

Below is the original image.

“Ultra-Orthodox publications are forbitten to show women in their print pages or websites,” NBC news reported.

Haaretz pointed out that at first, B’Hadrei Haredim didn’t blur the legs of Miri Regev. “While Minister Miri Regev’s face has been completely distorted, her completely bare — and not unattractive legs appear unmarred, and in direct proximity to the hand of Prime Minister Benjamin Netanyahu,” Haaretz wrote.

Last month, Orthodox news outlet Kikar HaShabbat blurred Kim Kardashian out of a photo of her, Kanye West and Jerusalem’s mayor Nik Barkat.  In another photograph, a receipt was Photoshopped on top of her. The editor of Kikar HaShabbat told the Associated Press that Kardashian is a “pornographic symbol.”

In January, the Ultra-Orthodox Israeli newspaper Hamevaser Photoshopped Germany’s Chancellor Angela Merkel and two other women from a photo from the Paris march after the attacks on Charlie Hebdo magazine, as iMediaEthics previously reported.

And famously, two Hasidic news outlets Photoshopped then-U.S. Secretary of State Hillary Clinton and Director of Counterterrorism Audrey Tomason from the well-known photo of the Situation Room during the attack on Osama bin Laden.