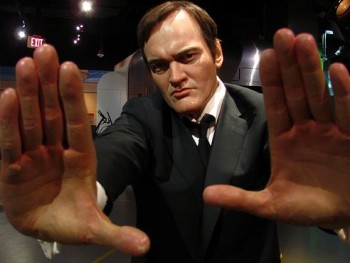 Film director Quentin Tarantino is suing Gawker Media over “blatant copyright infringement”  after one of its blogs linked to a leaked script, according to Mediaite.

Tarantino was planning to direct a movie titled The Hateful Eight but said last week he decided against it because the script leaked. On Jan. 23, Gawker’s Defamer blog reported on the leaked script, linked to the leaked script, and included descriptions of the script. The Defamer blogpost is headlined: “Here Is the Leaked Quentin Tarantino Hateful Eight Script.” One of the links directs to anonfiles.com, a website that allows “anonymous file upload.” That link now reads: “file does not exist.” Another link to the script, published on badassdigest.com, now says the script page was “removed by lawyerly request.”

“Rather than merely publishing a news story reporting that Plaintiff’s screenplay may have been circulating in Hollywood without his permission, Gawker Media crossed the journalistic line by promoting itself to the public as the first source to read the entire Screenplay illegally.”

The lawsuit goes on, according to The Hollywood Reporter, which obtained a copy of the complaint:

“Their headline boasts… ‘Here,’ not someplace else, but ‘Here’ on the Gawker website. The article then contains multiple direct links for downloading the entire Screenplay through a conveniently anonymous URL by simply clicking button-links on the Gawker page, and brazenly encourages Gawker visitors to read the Screenplay illegally with the invitation to ‘Enjoy!’ it.”

Further, the lawsuit claims that the leaked script wouldn’t have been noticed had Gawker’s blog not promoted a link to it.  The complaint states:

The lawsuit also claims that Gawker Media wouldn’t unpublish the links to the leaked script or comply with “submissions of DMCA notices of copyright infringement.”

Tarantino wants a jury trial, according to the lawsuit.

iMediaEthics has written to Tarantino’s lawyers and Defamer for comment. We’ll update with any response.

UPDATE: 1/27/2014 5:44 PM EST: Gawker’s editor John Cook has responded to the copyright lawsuit news with a blogpost on Gawker sayin the site would “be fighting” the lawsuit.

Cook further argued that Tarantino was responsibile for publicizing th leak of the script, and that Gawker’s post on the script leak “was news.”