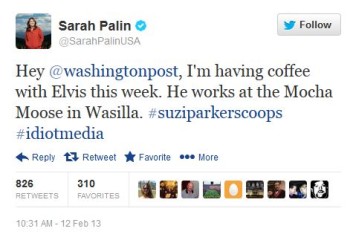 Sarah Palin criticized the media after the Washington Post published an article based on the Daily Currant's satirical story. (Credit: Twitter, screenshot)

iMediaEthics wrote earlier today about the Washington Post’s correction after being duped by a satire story claiming Sarah Palin would be working for Al Jazeera.  As we explained, the Post’s story – by Suzi Parker – was based on a post by the satire site Daily Currant, which included several red flags indicating that the article wasn’t fact– including questionable quotes attributed to Palin and Al Gore.

We’ve since heard from the Daily Currant‘s founder and managing editor Daniel Barkeley in response to the Post’s error. Barkeley, who called the Washington Post story “quite unusual,” noted that the Daily Currant’s “site is clearly labeled as satire, and our articles contain clear indications that they are satirical in nature.”

For example, Barkeley noted that:

“In this particular article we have the former Vice-Presidential candidate of the Republican party mispronouncing a news network’s name as ‘Al-JaJizzraa’ – which contains a slang term for semen. And we quote Tina Fey’s fictional character in the sitcom 30 Rock for analysis.

“It should have been clear to any journalist that the article was satire.”

See above a screenshot from the Washington Post’s story before the Post corrected.  iMediaEthics highlighted where the Currant’s quote was changed by the Post. (Credit: Washington Post, screenshot, highlight added)

“In this case what disturbs me most was that the Washington Post misquoted our article and changed a direct quote to make it sound more realistic,” Barkeley wrote to iMediaEthics, adding that he didn’t know “why they would do that” and that “we were completely baffled when we read it.”

Barkeley also suggested this incident is because of the changes to the newspaper model and 24/7 news.

“In the context of 24 hour news cycle, blogs, and Twitter it is understandable that journalists are making more mistakes. Their job has become significantly harder in recent years. Journalists are being asked to do more work with less pay and even less job security. We can’t be surprised that mistakes like this happen from time to time. …

“I have sympathy with the author of the article, who probably didn’t intend on being mocked on Twitter by Sarah Palin today. But I do think this incident reveals the reputational risk that major new organizations take when they outsource content to freelance bloggers, and highlights a need for increased editorial controls on such arrangements.

“In the long run newspapers need to find a sustainable revenue model for the digital age, which will allow them to rely more on full time professional journalists and less on bloggers.”

As Barkeley noted, Palin herself responded to the error in a few tweets critical of the media. In one tweet, Palin wrote:

“Hey @washingtonpost, I’m having coffee with Elvis this week. He works at the Mocha Moose in Wasilla. #suziparkerscoops #idiotmedia”

Later, she referenced the Washington Post’s Dana Milbank’s Jan. 2011 announcement that he wouldn’t write about Palin in the month of February, tweeting,

“A @washingtonpost writer once promised not to write about me for a month. That was a good month for me. #idiotmedia”

iMediaEthics has asked the Washington Post for comment about the changed quote and will update with any response. The Washington Post’s Kris Coratti said she would “try to get in touch with the contributer to ask her.”