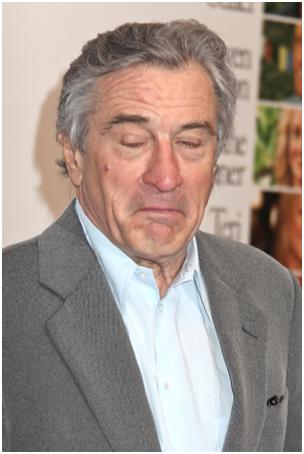 Images of people with their eyes closed used to be thrown away...yet a photo gallery on the New York Daily News web site publishes a photo of Robert DeNiro with his eyes shut? Greg Watts of photo agency Rex Features tells us this type of photo is known as an "oops" photo. (Credit: Gregory Pace/BEImages)

The New York Daily News has won ten Pulitzer Prizes in its history and is the sixth largest newspaper in the United States.

So, why is it publishing photos of celebrities picking their noses?

It used to be that bad photographs of people with their eyes shut or in mid-sneeze never saw the light of day. However, the New York Daily News has capitalized on 198 equally bad photos of celebrities in its often cruel and juvenile photo gallery titled “Meanest Celebrity Photos.”   Apparently now even normally unsellable images can be monetized by the Daily News on its web site.

The 198 images present celebrities from Snooki to Angelina Jolie in a variety of unphotogenic poses. These unflattering images should be on the cutting room floor, not in a top newspaper’s photo gallery.

The Poynter Institute’s Sara Quinn:  “I see what you are saying about the Daily News feature. With that particular ‘gossip’ section of their site, it would seem that they are reaching out to audiences like oh, so many gossip tabloids have before. I don’t personally consider this to be photojournalism so much as paparazzism. (Roy Peter Clark and I have conferred on this and think it should be a word). They’re obviously trying to increase traffic.  To answer your question: Is there such a thing as a bad photo anymore? I say yes. Thank goodness there’s still great photojournalism out there, too.”

If the photos showing celebrities sneezing, closing their eyes, and mid-speech weren’t bad enough, in some cases, the Daily News zooms in on photos that reveal cellulite, cold sores and pimples. A pimple on Blake Lively’s forehead is magnified because the red mark is too small to see.

Who Writes These Captions?

The next image in the “Meanest Celebrity Photos” is a photo of Kevin Kline with an awkward expression.

The caption fabricates, without saying so, that Kline’s expression was a reaction to Michaels’ arm pit odor in the previous photo. It states: “Kevin Kline just got a whiff of Bret’s arm pit.”

Readers are left wondering who the Daily News pays to write these captions?  Did the Daily News, number six among the ten largest newspapers in the U.S., possibly employ a 10-year-old?

There Are Ethics Codes For Photography, Captions

The Society of Professional Journalists’ (SPJ) code of ethics advises journalists “Make certain that headlines, news teases and promotional material, photos, video, audio, graphics, sound bites and quotations do not misrepresent. They should not oversimplify or highlight incidents out of context.”

NPPA calls for its members to “encourage visual journalists to reflect high standards of quality in their professional performance and in their personal code of ethics. NPPA strives to create, promote and maintain a high spirit of community and a high standard of conduct among its members.”

And in addition, the NPPA’s ethics code recommends its photojournalists “treat all subjects with respect and dignity.”

iMediaEthics asked the NPPA for comment, but the photographers’ association, including the Ethics Committee Chairman,  refused to comment.

Breaking Down The Gallery Into Categories

We categorized the photo gallery’s then-169 images into the following categories.  (Note: The Daily News added 29 photos to its gallery on April 5, 2011, just a day after we requested comment from the newspaper’s communications director for this article).

So don’t worry, if you happen to miss Bret Michaels’ sweaty armpits, there are another 16 photos to be found among the now 198 images of celebrities who have sweaty arm pits.

The Daily News may be monetizing traditionally unusable and bad quality photos for its own enrichment, but this photo gallery left us feeling embarrassed for the newspaper. It seems to set a new low even for celebrity journalism.

What happened to photojournalism and taking pride in getting a good shot?

Greg Watts, who works for the photography company Rex Features, which is credited with several of the images in the Daily News photo gallery, told iMediaEthics director Rhonda Roland Shearer that in the “last few years, these images are handy to sell to be honest…This whole celebrity thing just took off.”

Watts added that “back in the day, these images were called ‘overs’ and put away…only the best ‘pictures’ went out” into the commercial realm. “Now they populate the news websites.”

A Photo Expert Weighs In

iMediaEthics sent the photo gallery to photojournalism and visual communications experts to see what they thought.  Is there any such thing as a bad photo anymore?

Ken Light, Center for Photography curator, adjunct asst. professor at Univ. California Berkely Graduate School of Journalism discussed the topic by phone with iMediaEthics :  “It’s both a combination of the quality of the photographs, which are definitely kind of scraping the barrel, and also the captions, which are kind of mindboggling.”

Light explained that he wouldn’t consider these photos “photojournalism,” but instead “paparazzi photos.”

Light questioned the Daily News’ maturity in its presentation of the images.

All the captions under the nose picking photos below are original to the Daily News:

“You wonder what it says about the Daily News or their audience or the level of maturity of their audience.  It’d be interesting to know how many hits the page gets,” said Light.

Is this part of a growing trend in photography?

Light noted that “there are historically images…Gerald Ford falling,” that are “almost mean-spirited” that have “made the news.”  (That image shows former U.S. President Gerald Ford falling down the stairs off a plane ramp.)

However, these Daily News photos and type of photography “is very different from the majority of practicing photojournalists who are out telling important stories and even risking their lives to capture the news that’s happening around the world.”

“Obviously, there’s a market for third-grade images, which is kind of sad, and it says more about the Daily News than it does the photographers,” Light commented.

“It may say more about what’s happening in the world and looking for opportunities to distract people with funny images, and it would be interesting to know who took these pictures and are they working paparazzi.”

iMediaEthics suspects this photo gallery sets quality and maturity aside for the almighty dollar (to generate  advertising revenue through clicks and traffic).

While we never heard back from the Daily News for an official comment, iMediaEthics director Rhonda Roland Shearer spoke with several staffers in the NYDN print and online photo department. (We will not name them to prevent harm resulting from speaking off-the-cuff despite being told who we are and what we are writing about in articles).

That Daily News staffer confirmed our belief that the photo gallery is purely for clicks. When asked about publishing photos with people having their eyes closed, the employee said it “promotes our advertising.”

In response to questions about the gallery’s fictionalized captions, the photo department source responded: “They do it in celebrity stuff. We don’t do it in news photos.”

While one source said that “we do draw lines…like for invasion of privacy,” when Shearer asked him about the above photo of Courtney Love on a gurney, the source suggested that I contact his editor as he did not know what to say.

For iMediaEthics , it was particularly disturbing that Daily News’ editors decided to include an invasive photo of Courtney Love on a gurney shot by their own photographer. This is obviously not a red carpet photo but a news image that made its way into the mean gallery.

iMediaEthics has written to all of the photo agencies credited with the photos criticized above. We only spoke to one, Rex Features, but will update with any response.