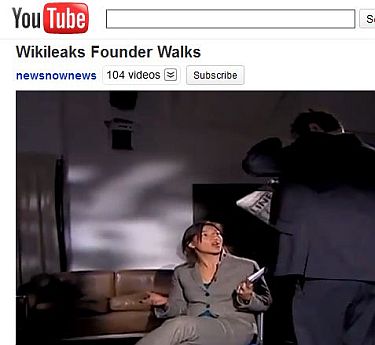 WikiLeaks founder Julian Assange walks out of a CNN interview when asked about his recent claims that rape accusations against him in Sweden were from a U.S. government conspiracy and a "smear campaign." Credit: CNN, YouTube)

Huffington Post reported that WikiLeaks founder Julian Assange walked out of a CNN studio interview in London when the  reporter, Atika Shubert, asked him about recent allegations against him, including pending rape charges in Sweden filed by two women. See YouTube video.

Assange told the CNN reporter: “This interview is about something else…I’m going to walk if you’re going to contaminate us revealing the deaths of 104,000 people with attacks against my person.”  Huff Post reported, “Assange repeatedly threatened to walk off, calling Shubert’s questions about his personal life ‘completely disgusting.’ ” Assange soon “removed his mic and walked off the set.”

CNN reported in its Oct. 23 story on the WikiLeaks document dump that it was offered a similar arrangement as the newspapers but opted against working with WikiLeaks “because of conditions that were attached to accepting the material.”  We have written to CNN asking what those conditions were and will update with any response.

The documents are dubbed the “Iraq War Diaries” and are “the largest classified military leak in history,” according to WikiLeaks.  WikiLeaks provided the same three newspapers (New York Times, Der Spiegel, and The Guardian) with the documents beforehand, allowing the traditional media organizations to analyze the “diaries” and prepare reports under embargo.  The traditional media outlets published their reports on the “Iraq War Diaries” Oct. 22, the same day WikiLeaks released the documents to the public.

Assange had said in July that WikiLeaks would like to work with a television station for its next big document publication. He also called the three newspapers, which have worked with WikiLeaks now twice, “the best newspapers in the world for investigative research.”

WikiLeaks calls itself a “not-for-profit media organisation.”  Its website also labels its work as a “new model of journalism.”

In our August 14 post on WikiLeaks, we reported the question asking if WikiLeaks is a news site or a news source.  New York Times executive editor Bill Keller had called the site just a source this summer, and noted that the Times hadn’t worked with WikiLeaks, but rather used information from WikiLeaks. As StinkyJournalism wrote in September, journalism ethicist Stephen J.A. Ward called for WikiLeaks to establish a code of ethics.

The new dump of WikiLeaks documents – 391,832 in total – span six years of military intelligence.  As the New York Times noted, the documents “were never intended to be made public,” and “some of the raw information” in the document dump can’t be confirmed.

The Times also compared this document dump to the Afghan war documents – both sets of documents don’t offer any “earthshaking revelations,” but they do “offer insight, texture and context.”

The New York Times explained that it did remove some information from the documents with the intent of protecting people.  Some information removed included names of prisoners and kidnap victims and information which could identify sources.

Der Spiegel similarly wrote that some identifying information was removed from the documents.  Further, Der Spiegel defended its publication of the documents – despite the U.S. government’s response – as the newspaper found the documents “expose additional dimensions” and “offer an unusual perspective” on the war.  But, Der Spiegel criticized the documents for being “one-sided and subjective, unverifiable” and possibly containing errors.

The Guardian noted in its report that WikiLeaks claims to have removed any names from the documents “that might result in reprisals.”  Also, despite the U.S. government’s claims earlier this summer that the Afghan war documents would lead to deaths, “the military recently conceded that no harm had been identified,” the Guardian reported.

The U.S. government has again slammed WikiLeaks for its publication.  U.S. Department of Defense press secretary Geoff Morrell condemned the publication in a statement in which he indicated that their publication will help terrorist organizations work against the United States. Morrell added that WikiLeaks should “expunge” the documents from the Internet.

Prosecutors are still investigating rape and sexual molestation allegations against Assange by two Swedish women. Assange has denied the allegations, calling it a “smear campaign.”