WSJ Fires Intern for Fabrication of Sources and Quotes - iMediaEthics

WSJ Fires Intern for Fabrication of Sources and Quotes 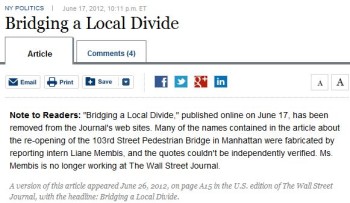 The Wall Street Journal fired an intern for fabrication, according to a note on its website.

The note explains that the intern, Liane Membis, made up “many of the names contained in the article” and “the quotes couldn’t be independently verified.” Talking Biz News also included a re-publication of the article in question.

Talking Biz News quoted a spokesperson for the Wall Street Journal who said Membis interned for “less than three weeks and wrote or contributed to five published pieces,­ one of which has been removed from our online archives and two of which have been edited to remove quotes that were provided by the intern and that cannot be confirmed.”  Poynter’s Andrew Beaujon noted that the two other articles are June 6’s “Space Shuttle Floats Into Its Manhattan Home” and June 10’s “Stop, Frisk in Spotlight.”

“Note to Readers: Two quotes in the original version of this article have been removed. The quotes were attributed to names that couldn’t be independently verified. The article’s author, Liane Membis, was a reporting intern who is no longer working at The Wall Street Journal.”

“Note to Readers: A quote in the original version of this article has been removed because it was attributed to a name that couldn’t be independently verified. The quote was contributed by reporting intern Liane Membis, who is no longer working at The Wall Street Journal.”

POLITICO noted that the note replaced Membis’ article, which is off the Wall Street Journal’s website.

Business Insider noted that Membis has written stories on CNN.com, Huffington Post, Ebony and the Yale Daily News.  We’ve written to CNN asking if it will review her work and will update with any response.  According to Poynter, Yale Daily News editor Max de La Bruyère said “Given that news, we’ll definitely have to go back and look at everything that she wrote and check as best we can.”  We’ve written to the Yale Daily News asking what the review will include and will update with any response.

We wrote earlier this week when the Connecticut-based newspaper New Canaan News apologized for its reporter’s plagiarism. Yesterday, the Connecticut Society of Professional Journalists, which gave the reporter, Paresh Jha, two awards last month, issued a statement on Jha’s fabrication.

WSJ Fires Intern for Fabrication of Sources and Quotes