Zendaya Calls out Magazine for Photoshop, It promises to publish real Images - iMediaEthics

Zendaya Calls out Magazine for Photoshop, It promises to publish real Images 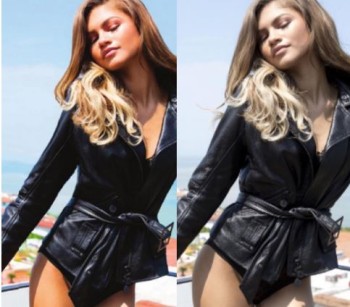 The Photoshopped Zendaya picture (left) and the original (via Zendaya) (Credit: Instagram)

Singer and actress Zendaya called out Modeliste magazine for heavily Photoshopping a picture of her. The magazine responded to deleting the faked photos and promised to use the real images Zendaya posed for.

iMediaEthics asked Modeliste editor Amy McCabe if the photos will be edited in any way when they are released. She told iMediaEthics by e-mail: ” The images will be completely unedited and un-retouched in their real and raw format.” McCabe added that the images will be published next week.

Zendaya posted a side-by-side image of the real photo and the doctored photo saying she was “shocked when I found my 19-year-old hips and torso quite manipulated.”

She pointed to the impact of Photoshopping: “These are the things that make women self conscious, that create the unrealistic ideals of beauty that we have. Anyone who knows who I am knows I stand for honest and pure self love.”

Had a new shoot come out today and was shocked when I found my 19 year old hips and torso quite manipulated. These are the things that make women self conscious, that create the unrealistic ideals of beauty that we have. Anyone who knows who I am knows I stand for honest and pure self love. So I took it upon myself to release the real pic (right side) and I love it?? Thank you @modelistemagazine for pulling down the images and fixing this retouch issue.

Modeliste editor-in-chief Amy McCabe posted on the magazine’s website a long letter in response to the issue. She promised to release the un-retouched images and  thanked Zendaya for “raising a very important issue.”

“Upon review of the final edited images which had been submitted to us by an independent editing company, together, as a collaboration between myself, Zendaya and her parents, we concluded that the images had been retouched to an extent that was not acceptable and not true to the values and ideals we represent and promote in our publication,” McCabe wrote. “I, therefore, made the executive decision to immediately pull the issue in order to have this rectified and have the images restored to their original, natural state which will reflect the true beauty and radiance of Zendaya.”

McCabe pointed out the negative effect of body shaming and commented, “It is our hope that these images and the truthful portrayal of these unedited images brings attention and awareness to this issue.”

iMediaEthics wrote to Zendaya’s website. We heard back that Zendaya has no further comment about this incident.

Zendaya Calls out Magazine for Photoshop, It promises to publish real Images