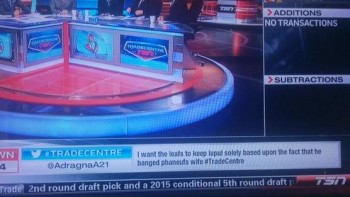 See an image of the tweet on TSN below.

The three threatened a lawsuit against the network if it didn’t apologize and pay damages.  Their lawyer Peter Gall said in a statement that he sent a formal letter to TSN and to the tweeter.

“It is bad enough that there are people who spend their time using social media to publish such false and malicious stories, but it is made much worse when a reputable media outlet like TSN gives broad circulation and credibility to these false stories by republishing them as TSN did,” Gall wrote. “If TSN and Mr. Adragna do not immediately comply with the demands set out in our letters, we have instructions from our clients to immediately commence a lawsuit against them.”

TSN apologized on air and in a statement on its website saying the tweet was “false and inappropriate.” The statement reads:

“There was no basis for the false allegation made in this tweet. TSN unreservedly apologizes to Joffrey Lupul, Dion Phaneuf and Elisha Cuthbert and regrets any embarrassment this unfortunate incident has caused to them.”

TSN also apologized Monday on its Twitter page, Sports Illustrated reported.   “Earlier today, an inappropriate and disrespectful tweet was erroneously aired,” its tweets read. “As soon as it was flagged, we immediately removed it. We’ve reached out to the Toronto Maple Leafs organization and all those impacted to extend our sincerest apologies for our error. It should have never, ever gone to air.” Read the tweets below.

Earlier today, an inappropriate and disrespectful tweet was erroneously aired. As soon as it was flagged, we immediately removed it. (1/3)
— TSN PR (@TSN_PR) March 2, 2015

We’ve reached out to the Toronto Maple Leafs organization and all those impacted to extend our sincerest apologies for our error. (2/3)

The person who tweeted the comment, @AdragnaA21, wrote it was “my bad” because Lupul didn’t like the tweet, but “TSN failed to their job right” (sic).  He added that his comment was a “joke” and he was surprised TSN aired the tweet.

Okay i feel like i have to say this before shit gets ugly. That tweet was a joke and i am in no way in support of those who commit adultery
— Anthony Adragna (@AdragnaA21) March 2, 2015

I guess i pissed off lupul… woops my bad man, not my fault TSN failed to their job right.

Whats all this crap about a lawsuit. If anyone is getting sued its TSN for being negligent not me
— Anthony Adragna (@AdragnaA21) March 2, 2015

iMediaEthics has written to the three’s lawyer, the tweeter, and TSN for comment.