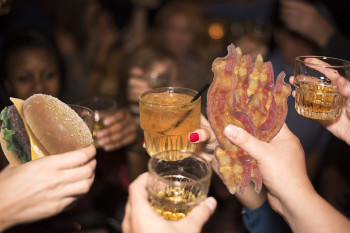 Do a third of vegetarians really go for hamburgers and bacon after drinking too much?

Media from the Huffington Post to the NY Daily News and USA Today were quick to cover a survey saying so earlier this fall, but where is the survey?

The news site that apparently originated the coverage of the survey, the UK Morning Advertiser, is a trade publication for pubs and told iMediaEthics its report was based on a press release. Not only that, but its story is essentially a copy and paste from the survey company’s press release.

UK coupon website Voucher Codes Pro is credited with producing the survey the media covered — which claims a polling of 1,789 British vegetarians found 1/3 of them ate meat when they were drunk.

But iMediaEthics is still trying to track down the survey. We’ve written several times to Voucher Codes Pro and left messages on its voicemail. Despite its website’s promise to respond to press inquiries “within minutes,” iMediaEthics has not heard back, much less been provided with the survey, its methodology or any other information on the alleged findings. We first contacted Voucher Codes Pro Oct. 10.

iMediaEthics’ polling director David Moore looked at the information provided on Voucher Codes Pro’s website, and published on the Advertiser‘s site. “Everyone citing it probably because it has entertainment value (!)…but there’s no information I can see that talks about how the survey was done,” he commented.

Moore raised serious concerns about the poll: “It’s only of vegetarians, so the question is – how was a representative sample of vegetarians collected? With no information at all about how the survey was conducted, there is no reason to take the results seriously.”

Last year, iMediaEthics came across a similar case, when media was citing, without fact checking or verifying, a survey from another UK coupon website, VoucherCloud, that was promoted by a viral marketing firm in the UK. In that case, the media said one of ten Americans thought HTML was an STD but the media never saw the survey before reporting on it or being skeptical.

Where did the Story Come From?

The Morning Advertiser appears to be the first news outlet to cite the study, with other outlets reporting on the story early on, including Food and Wine and Vice’s Munchies, linking to the Advertiser’s coverage, or had the same content as the Voucher Codes Pro blogpost on the survey. 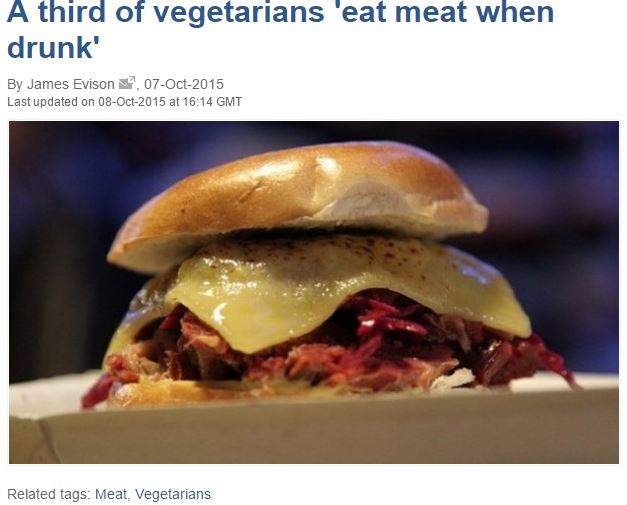 A screenshot from the Morning Advertiser‘s story on the drunk vegetarian survey.

The Morning Advertiser‘s Oct. 8 story carried the byline of James Evison and its information is credited to Voucher Codes Pro, the company that is listed as conducting the survey. The Advertiser is a weekly magazine devoted to pubs in England and Wales.

iMediaEthics contacted the Advertiser‘s editor Ed Bedington who directed us to Voucher Codes Pro for more information about the survey and confirmed that the Advertiser‘s writer lifted from the Voucher Codes Pro press release. “The story is from a press release by the vouchers website – you’ll have to chase them for the source material,” he e-mailed iMediaEthics. “It looks like James took the story from the original press release, hence the similarity (I’ll have a word with him about cutting and pasting!!!).”

See below a highlighted version of the Advertiser‘s story. Highlights indicate content that is verbatim from the Morning Advertiser blogpost. 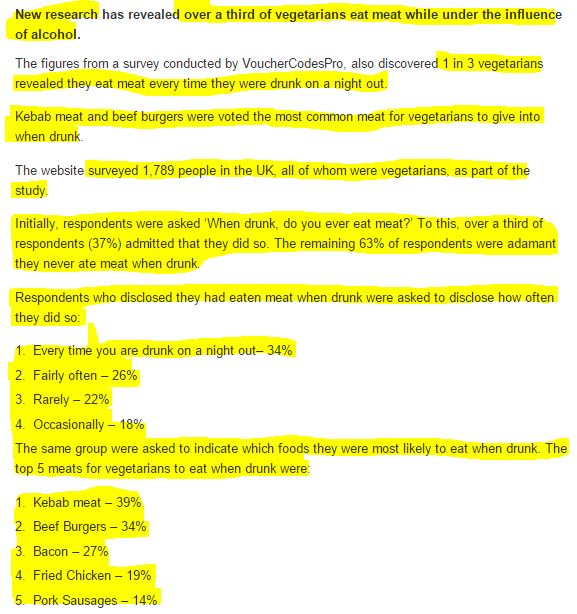 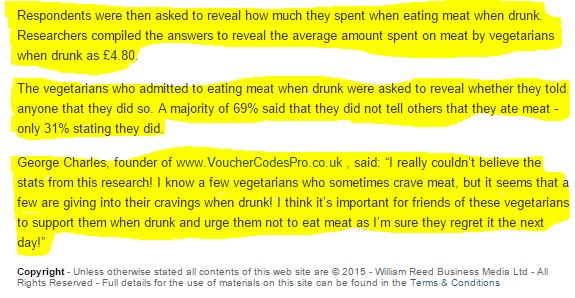 Voucher Codes Pro identifies itself as a “leading money saving website in the UK” and said it surveyed 1,789 UK vegetarians.

Who Has Covered the Story?

“We recently conducted some research into the number of vegetarians who eat meat when they are drunk. Our research found that 1 in 3 vegetarians eat meat when they are drunk. The research was really interesting for us here and couldn’t wait to get it out to the press. The response we have seen has been incredible! The likes of the Independent, Metro, Yahoo, Huffington Post and the Telegraph ran the story in the UK. We didn’t, however, expect the response we received over in America. We’ve received incredible numbers of coverage including Fox News, Elite Daily, Daily Wire, Today FM, Mother Jones, App.com and many many more. We were also covered on USA Today, which is the subject of today’s press article.”

The study warranted not one, but two stories in the Huffington Post. Below are links to some of the many, many news stories on the unverified survey: