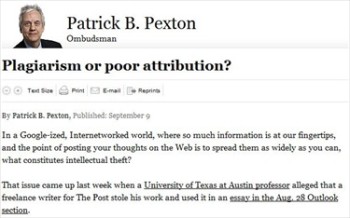 iMediaEthics wrote in March when the Post suspended staff reporter Sari Horwitz for three months for plagiarizing from the Arizona Republic.  We also wrote in May when Pexton revealed that its freelancer Robert Rigney had plagiarized from a documentary. That freelancer, Robert Rigney, was fired from the Post. At the time, Pexton commented: “I feel sure that this will happen again.”

As Pexton explained in his Sept. 9 column, University of Texas-Austin professor Nathan Ensmenger accused Lewis of plagiarizing his research in an Aug. 28 essay for the Post headlined “When Computer Programming was ‘women’s work.'” Ensmenger alleged that “the first half of Lewis’s essay is based largely on his, and fellow academics’, considerable research into the role of women in the early computer industry,” according to Pexton.

However, despite Ensmenger’s claims that Lewis plagiarized and that Lewis’s essay’s lack of attribution wouldn’t fly in an academic setting, Lewis and Rachel Dry, an editor at the Washington Post, stand by the essay and its attribution, Pexton stated.

Lewis reportedly told Pexton: “I have stolen nothing, I have plagiarized nothing. I attributed according to my best judgment.”  Dry added that she didn’t”see how she treated the material unfairly.” However, Dry noted that “if she had it to do over again she would have put in an attribution to Ensmenger,” Pexton wrote.

However, Lewis didn’t cite Ensmenger’s “work nor the years of research that underlay his analysis.”  She did include an attribution to “Thomas J. Misa’s essay collection ‘Gender Codes: Why Women Are Leaving Computing,’ in which Ensmenger has one key essay and cites the Cosmo story,” according to Pexton.

Pexton ruled that because there weren’t any links in Lewis’ story, it “has too little attribution.”  He noted that her essay was “adapted from a blog post she wrote for Fog Creek’s Web site” which “embedded lots of links to her sources, including one to Ensmenger’s Web site.”  Her July 26 blog post features numerous links including to Misa’s book and Ensmenger’s website.

StinkyJournalism asked Lewis about the lack of links.  Did she not provide them or were they not asked of her?  She responded via e-mail:

“My Outlook editor did not ask me for links. I do remember wondering if or when I would be providing them but, as I was under tight deadline to produce the draft, I assumed she’d ask for them or that she or her colleagues would be deciding where to put links and collecting the urls for them. “

iMediaEthics contacted Ensmenger for more information.  He told us via e-mail that he wasn’t “satisfied” with Pexton’s column and noted that from the beginning, “he would have been perfectly happy with a private apology and a minor correction.”  He noted that the Washington Post’s decision to publicize the charges against Lewis and the Post.

Ensmenger reiterated his claims that Lewis’s essay plagiarizes from his work by lifting not just “ideas” but also “structure of arguments.”  Noting that Pexton never offered the newspaper’s definition for plagiarism, Ensmenger questioned how the Post would have reacted if “another newspaper had ‘borrowed’ so heavily from a Washington Post piece without attribution.”

Ensmenger added that “journalists have a tendency to treat historical research as if it were commonly accepted facts,” and suggested that journalists include better attribution for research. Specifically in this case, he noted that Lewis didn’t name or attribute any information to him.

He questioned if Lewis was able to consult the “original Cosmopolitan article” she opens her article with, considering he spent “years to track down a clear copy (via eBay).”

Ensmenger noted that he would likely take no further recourse in this case, but commented that throughout “the whole process” of attempting to get attribution, “academic friends and colleagues” told him about “similar experiences they had with ‘journalists.'”

Ensmenger added that throughout the time he spent lobbying the Post on this issue, Pexton was “most understanding” and “sympathetic”   He added that “an earlier draft of the editorial that he shared with me was much less defensive,” however  the published column “added definitive statements” rejecting plagiarism charges.

Since Pexton’s column was published, links have been added to the first half of Lewis’ story on the Washington Post website. An “editor’s note” has been appended to the story  noting that the story was “udpated to include links to sources, research and statistics that were omitted from the original publication.”  The editor’s note provides a link to Pexton’s column.  Links added in text include several references to Thomas J. Misa’s “Gender Codes: Why Women are Leaving Computing” book and to Ensmenger’s website where the Cosmopolitan article is published.