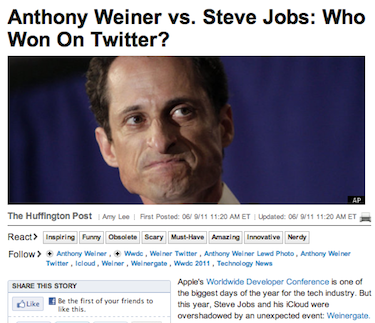 This is the story by Amy Lee for the Huffington Post that triggered her suspension. (Credit: HuffPost, screenshot detail)

The Huffington Post “indefinitely” suspended reporter Amy Lee July 11 after she was accused of over-aggregating an Ad Age article.  However that “indefinite” suspension is already over, Poynter reported.

Lee will return on July 25, after the Huffington Post has completed an “internal” evaluation, AOL/Huff Post communications VP Mario Ruiz reportedly e-mailed Poynter.  Ruiz added that the Huffington Post is “confident in [Lee’s] abilities” and has “completed an internal review of the process and policies relating to the publication of stories on HuffPost.”

The suspension has called into question what some call Huffington Post’s practice of “unethical aggregation” as journalists and bloggers defend Lee — but not the aggregation.  Writers from Gawker, the Awl and LA Weekly argue that the article merely followed HuffPost’s normal practices and that Lee is being singled out to make an example.  However, Huffington Post has upheld the decision to suspend Lee.

Meanwhile, journalists like Ad Age’s Simon Dumenco, who first criticized Lee’s aggregation of one of his articles, have identified other instances of Huffington Post’s aggregation and assert that the institution must change its ways.

The date was important to both, as it was the first day of the annual Apple Worldwide Developer Conference  as well as the same day that Weiner announced in a press conference that he had sent lewd messages to six women online.

However, to report on the topic, the Huffington Post article drew heavily from an Ad Age article by media columnist Simon Dumenco, who conducted research alongside social media research company Trendrr to write the piece.

Dumenco noted in a July 11 blog post  that both Techmeme and the Huffington Post reported about his article’s findings. While Techmeme’s report consisted of a brief description of the article and linked back to Ad Age, Dumenco described Huffington Post’s Amy Lee’s report as a “short but thorough paraphrasing/rewriting of the Ad Age post.”

Dumenco cited Google Analytics, which reported that the TechMeme report “drove 746 page views to our original item,” but the Huffington Post report. yielded just 57 page views to the original post.

Though the Huffington Post linked to his article, they “cherrypicked all the essential content,” which implies that they wanted readers to stay on their website instead of redirecting to read his original article, Dumenco wrote. He called the practice “unethical aggregation.”

In an update, Dumenco reported that Peter Goodman, Executive Business Editor of the AOL Huffington Post Media Group, e-mailed him that Dumenco’s complaint was “completely valid.”  Goodman wrote that the Huffington Post has “zero tolerance for this sort of conduct” and that consequently, they had suspended Lee indefinitely.  Goodman put the blame on the reporter, Lee, because the post didn’t follow “how we train our writers and editors to handle stories such as this.”

Goodman apologized to Dumenco for the article and added that his “complaint has prompted us to redouble our efforts to make sure our reporters and editors understand that this sort of thing is unambiguously unacceptable.”

In an interview with Ad Week, Goodman explained the decision to suspend Lee.  According to Goodman, Lee was not being “singled out” to blame for the incident and that “the organization took the fall for this.”  He declined to specify the decision-making process that contributed to Lee’s suspension. He suggested that perhaps the aggregation issue wasn’t the only reason behind Lee’s suspension, but noted that “in Amy’s case we are concerned that a strong message needs to be conveyed.”

Goodman added that the aggregation is “something improper” and “that goes up the chain — to the editing.”  Goodman stated that “the editor is taking responsibility.”

StinkyJournalism wrote to Goodman to ask if anyone other than Lee had been punished for the incident. We received a response from AOL’s communications vice president, Mario Ruiz, who stated that the mistake was “shared by editors” and that “the company holds regular editorial meetings to review the guidelines and to underscore the practices.”

Ruiz did not state whether an editor had been punished for the incident and he did not reply to a further inquiry from StinkyJournalism.

Ad Age’s Dumenco wrote again on the aggregation issue, specifically responding to Goodman’s apology.  In a July 12 open letter to Goodman, Dumenco claimed that Lee was only following the existing practices of the Huffington Post and should not be penalized for it.

In the “media blogosphere…there’s general unanimity that HuffPo is singling out — instead scapegoating — a young writer for engaging in a style of aggregation long practiced, condoned and encouraged by Huffington Post editorial management,” Dumenco wrote.

Dumenco pointed out that the practice of aggregation is “essentially embedded in the very DNA of The Huffington Post” and that solving the problem requires an institutional change.”

Is this Heavy Aggregation Common Practice?

Though the article credits Playboy for the original interview, “it all but preempts the reader’s desire to click through and visit the original source,” Dumenco commented.

“If you’re really interested in reforming what many regard as the unethical aggregation practices at HuffPo, the post stealing from Playboy needs to be pulled right now,” Dumenco wrote in his open letter to Huffington Post’s Goodman.

Likewise, LA Weekly‘s Dennis Romero, claimed that “aggressive aggregation” was a common practice of the Huffington Post, as well as on many other blogs.  Romero criticized the suspension:  “It’s unconscionable for the HuffPo to have [built] itself up via other news org’s reporting and then burn kids for towing the company line.”

iMediaEthics has also written to the suspended reporter Amy Lee and Ad Age’s Simon Dumenco for comment, and will update with any response.