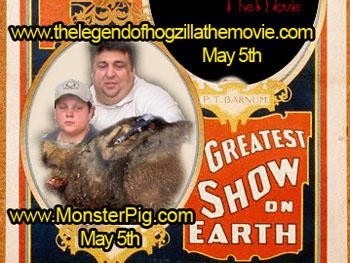 AP, FOX News, CNN, CBS, et al had a duty to check out the photos and determine if they are phonies BEFORE publication. Yet, to this day, NO news outlet has offered ONE scientific expert to address StinkyJournalism’s charge that the photos were manipulated. Yet, they keep reporting.

Mainstream media, yet again, ignores their fundamental duty to protect the public and “to seek truth and (then) report it.”

From the frying pan into the fire, Monster Pig is getting its bacon greased. The tall tale of Jamison Stone and his porcine prize is crashing and burning. StinkyJournalism, which has been leading the charge to debunk the story, is finding oddities in the timeline of events, as well as curious commercial connections, suggesting that nefarious motives lie behind this piggy perfidy. (Please refer to the timeline accompanying this story below to help understand how the events unfolded)

Presumably, the story began when Lost Creek Plantation, a hunting preserve in Delta, Alabama advertised a hunt for a giant, 1,000 pound pig for the discounted price of 1,500 dollars.

“LCP is offering a once in a lifetime opportunity to harvest a truly giant boar…Eddy Borden, owner and operator of LCP, has just trapped another boar… this monster will weigh at least a thousand ponds – that is a half ton of pork! The beast is now roaming the worlds of Lost Creek Plantation. We are offering this hunt on a no kill = a no pay basis. The total cost of this hunt is fifteen hundred dollars and includes everything but the processing of the meat. The boar is jet black and has huge tusks. Keith O’ Neal and Chris Williams will be on hand to help guide and video this hunt. if you ever wanted to take an animal of this magnitude, now is your chance! this beast will not last long, so if you’re interested call us ASAP. Yours in hunting/fishing, Keith O’ Neal Southeastern Trophy Hunters, April 28, 2007.”

The above quotation has since been removed from the Southeastern Trophy Hunters web site, but StinkyJournalism thought ahead and saved an archived copy.

On May 3, Mike and Jamison Stone accepted the challenge and embarked upon their hunt for the ferocious feral beast. Later that day, young Jamison, wielding a fifty caliber Smith and Wesson handgun, spied the piggy and shot it nine times taking over three hours to kill it.

Upon reviewing the initial claims, StinkyJournalism was suspicious and became the first to present scientific evidence that the photos of the boy and his giant pig were bogus. StinkyJournalism now will be the first to expose the dubious timeline that suggests fresh sausage was not the only bounty sought by Mr. Stone. Hunting a feral boar wouldn’t seem to be a choreographed event but this “wild” animal appeared right on time for its fifteen minutes of fame.

Lost Creek Plantation apparently counted on the bogus boar to be quite punctual, pre-selling the domestic beast as “wild” to its would-be hunters and even inviting the press to witness the May 3rd event, according to the Anniston Star.

www.thelegendofhogzillathemovie.com and www.monsterpig.com URLs were bought on May 5th, two days after the hunt.

The historical record further reveals that on May 5, two days after the hunt, two allegedly independent web sites were registered.(tip thanks to J. Tithonus Pednaud) One was for Monster Pig, a site dedicated to young Jamison’s odyssey through the Alabama woods in chase of the behemoth boar.(www.monsterpig.com). The other was for the upcoming Hogzilla movie, which is based on the story of a giant pig shot in Alapaha, Georgia by Chris Griffin in 2004.( www.thelegendofhogzillathemovie.com.) It is interesting that both Mike Stone and the producers of the Legend of Hogzilla movie independently registered their respective websites on the very same day. It is even more interesting that the movie has been in the planning phase for a year, and suddenly its public website is registered at the same time as Mike Stone’s monsterpig.com Important to note, monsterpig.com has been registered by proxy, shielding the actual identity of the owner of the site. According to their self-generated IMDb entry, The Legend of Hogzilla moviemakers (the same folks who recently cast Jamison, a member of a proudly conservative Christian family) include co-director and pornstar Daniel West.** (You might know West from his roles in titles such as “Black Drills and White Holes,” and “Black Wishes.”).

**(UPDATE, 6/4: In order to pursue legitimacy, Hogzilla’s producers put great importance in having the movie represented in the IMDb database–a sort of who’s who list in the industry. The first application to IMDb by the movie’s producers was rejected. The rejection came in spite of the inclusion of the “experienced” Daniel West’s acting credits. Helped by the media furor surrounding the “monster pig,” however, their second application was accepted as legitimate. In an interview with producer Rick Trimm,  Shearer learned that the team had creatively (and unwittingly) piggybacked their Daniel West’s profile onto that of pornstar Daniel West. Trimm says the reason that the listing was not changed immediately was his lack of computer skill.)

Mike Stone now asks $500 per use of his boy and Monster Pig photo.

Cinematic stardom is not the only reward the Stones will receive for felling the great beast. Mike Stone, who has disclaimed any notion of profiteering from the media coverage of the hunt, is certainly attempting to capitalize. StinkyJournalism exclusively learned that Mr. Stone is demanding a five hundred dollar payment for each use of the photos he took of his son and the pig carcass, in addition to $10 per poster.

Mr. Stone had also been promoting Monster Pig hats and t-shirts before StinkyJournalism inquired as to the financial motive behind such a savvy marketing maneuver. He even claims to have a video of the boar, but won’t release it until the current furor dies down. According to the Anniston Star, “Mike Stone indicated that there is a video of the hunt, but would not release it for some time. He said he wants the hype and the backlash…to die down. ”

P.T. Barnum could not have planned better. There were even plans for a sponsorship on the web site from Smith and Wesson of the very gun little Jamison used to slay the hog, which has since disappeared from the site. Taking all these oddities into account – the swift connection to the Hogzilla movie, the apparel sale, the product placements and sponsorships, – questions arise as to just how Mike Stone was able to captivate the media world with the story of such a super swine.

Mike Stone may have removed the monster pig hats and t-shirts from his web site, but he continues to use the pig’s fame to promote barbeque equipment, his auction house, and Lost Creek Plantation and Southeastern Trophy Hunters.

With the continuing revelations from StinkyJournalism, bloggers and the mainstream media that bravely followed the blogger band wagon in exposing the hoax, it is questionable as to how much longer Mr Stone will continue to piggy back media interviews with profits.

May 2, 2007: Lost Creek Plantation picks up keys in preparation for weighing “feral” pig at local Farm Co-op the next day.

May 5, 2007: Monsterpig.com and thelegendofhogzillathemovie.com are registered on the same day according to whois registration records. Monsterpig.com registrant pays extra to keep ownership secret. (tip thanks to J. Tithonus Pednaud)

May 25, 2007: Associated Press sends sensational story and photo over the wires without any scientific verification. No experts quoted.

May 26, 2007: International press takes the bait without any scientific verification. No experts quoted.

June 2007 and beyond : What’s next? Will release of the videotape of the hunt create a new international fervor? Or is the pig story barbeque?

More on this story: