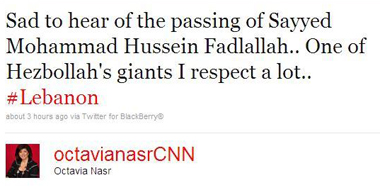 This tweet (since removed) by Octavia Nasr cost Nasr her position as senior editor for Middle Eastern affairs at CNN. (Credit: LATimes)

The CNN reporter, Octavia Nasr, was fired for tweeting her respect for Hezbollah leader Sayeed Mohammed Hussein Fadlallah after his death on July 4.

“Sad to hear of the passing of Sayyed Mohammed Hussein Fadlallah … One of Hezbollah’s giants I respect a lot.”

Nasr blogged July 6 to elaborate on her tweet.  She wrote that her tweet was a “lesson on why 140 characters should not be used to comment on controversial or sensitive issues, especially those dealing with the Middle East,” and that “it was an error of judgment for me to write such a simplistic comment.”

Nasr apologized for her tweet, suggesting she “supported Fadlallah’s life’s work,” because “that’s not the case at all.”  What she respected was Fadlallah’s perspective on women’s rights, she wrote.

The New York Times reported that a CNN spokesperson said the tweet was an “error of judgment” and didn’t “meet CNN’s editorial standards.”

And that Parisa Khosravi, the senior vice president for CNN International Newsgathering, wrote in an internal memo that the tweet damaged Nasr’s credibility.

“At this point, we believe that her credibility in her position as senior editor for Middle Eastern affairs has been compromised going forward,” The New York Times quoted Khosravi as saying.

Nasr’s CNN position wasn’t to “run CNN’s Middle East coverage,” but to report and give “analysis about the region for CNN/U.S., CNN International and CNN.com,” The Times reported.

Jack Shafer wrote July 8 on Slate about Nasr’s firing and The Washington Post’s Dave Weigel’s resignation. On July 2 StinkyJournalism wrote about Weigel after he resigned following his e-mails that went public from on a private listserv called Journolist. The e-mails contained negative comments about some of the people Weigel, as a reporter on the conservative movement, covered.

Shafer wrote that no one should be surprised that journalists have opinions, even if they are supposed to hide them.  While  journalists’ work should be objective, the journalist may not be.  There weren’t complaints that Nasr and Weigel didn’t report well – just that they expressed opinions, Shafer opined.

“That journalists have opinions and express them in private and sometimes (to their frequent regret) in public should come as no shocker…like scientific inquiries, almost every new story begins with some sort of bias or hunch or leaning. A reporter or an editor thinks this story is more promising or interesting than that story, therefore they agree to pursue it. But without reporting both stories—or every possible story, which is impossible—how can the editor and reporter really know which was the “right” story to assign? They can’t. They can only trust their biases. The journalistic method was the thing that was supposed to be objective, not the journalist, a method that depended on verification of results and findings.”

Arkansas Business reported July 8 that four employees at NBC-affiliate KARK-TV in Little Rock were fired because of a “profanity-laden spoof of broadcast news” made in two videos.

The videos run a total of almost 12 minutes long and show the reporters making fun of their jobs.

Arkansas Sports 360 noted July 9 that Hatley is only featured in 17 seconds of video footage with the one line “Here’s your script, Pete.”

The videos were posted on YouTube in June and early July, but have been removed. Arkansas Business posted them here:

Arkansas Business reported that KARK news reporter Pete Thompson, who is prominently featured in the videos, said that the four did film some of the footage at KARK studios.  Some of the footage is also from B-rolls.

“It is not unusual for on-air reporters to have clauses in their employment contracts regarding off-camera public behavior. Such clauses are in place to prevent employees from reflecting poorly on their employer. It is not known what kind of contract KARK’s on-air reporters might have,” Arkansas Business wrote.

However, iMediaEthics noticed that in the second video, one of the four – Collins – even mentioned that as reporters they signed contracts with the station.

Arkansas Business recalls that Collins and Thompson made the news before when Thompson proposed to Collins on air.

Radio and Television Business Report posted a statement from KARK’s general manager, Rick Rogala, about the videos.  Rogala wrote that the station “has no tolerance” for the videos and apologized.

“In a very unfortunate series of incidents, a number of KARK employees acted on their own accord to produce unauthorized, offensive and distasteful videos that were subsequently posted to the internet. I am personally shocked and saddened by the behavior of these employees.  KARK has no tolerance for this type of behavior and messages that degrade and discredit our community and our employees. As a result, those involved have faced swift and appropriate disciplinary action.  On behalf of the dedicated team members of KARK who take great pride in their community and profession, I would like to extend our sincerest apologies.”