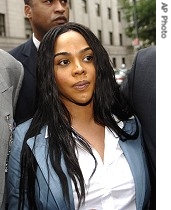 According to The New York Daily News, Lil’ Kim’s  publicist, Lisa Perkins” said “She is NOT running for mayor of Hoboken.” Perkins said that Kim “has no association” with the hoaxer who was “committing fraud.”

Apparently, the only thing Kim does needs votes for is her new jig as a competitor for ABC‘s “Dancing With The Stars (DWTS).”

Hummm. Do I smell possible publicity stunt? I guess hoaxers are confident that media won’t call to verify “facts” in press releases before publication. Sad, isn’t it?

The Daily News reported that Kim has “been a breakout hit on the show, earning praise for her ‘bionic booty.’ ” Lil’ Kim did make a direct pitch in the Daily News article for votes: ” ‘Yes, we’re campaigning. Vote for Derek and Kim,’ she told Extra, referring to her DWTS dance partner Derek Hough and their campaign for viewer support.”

The Daily News also said 1010 WINS news removed the story after they discovered the press release they received on Kim’s potential candidacy was a hoax.