TIME-Pew Poll About End of Marriage Is Unsound: PollSkeptics Doubt 40% of Americans Say Marriage Is Obsolete

TIME-Pew Poll About End of Marriage Is Unsound 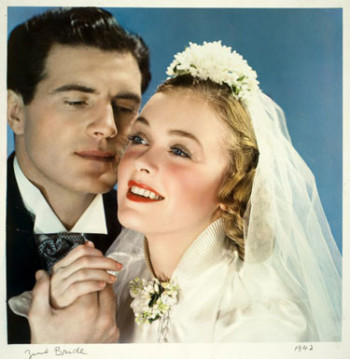 Is Marriage a thing of the past? (Credit: George Eastman House)

It looks like marriage is on the way out if we’re to believe the latest joint media poll on this hot social topic.

“Who Needs Marriage?…” screamed the cover of Time magazine in its November 18, 2010 issue.

This sensational poll story went viral almost instantly in the global news media and on the Web.

According to the Time-sponsored poll by the Pew Research Center, about 40% of Americans now say “the present institution of marriage is becoming obsolete,” up supposedly from 28% when this question was first asked in 1978. End of story? Not exactly.

The in-depth Pew survey reported lots of other findings about Americans’ views of marriage, but it was the 40% saying it’s obsolete that dominated mass media coverage and the public’s attention.

Take a Close-Up Look at Questions Though

When we take a closer look, however, at both the Pew poll and the original Time-sponsored survey in which the marriage question was asked by Yankelovich, Skelly & White in March of 1978, the change over time looks more apparent than real.

The problem of comparing apples with apples over time looms large.

Take a look at the question about marriage becoming “obsolete” and the immediate context in which it was asked by Pew and Yankelovich et al. First, the questions and results from the October 2010 Time-Pew survey read:

Q3. “These days there seems to be a growing variety in the types of family arrangements that people live in. Overall, do you think this is a good thing, a bad thing, or don’t you think it makes a difference?” [Emphasis mine]

Q. 3a. “Some people say that the present institution of marriage is becoming obsolete. Do you agree or disagree?” [Emphasis mine]

Compare the context of this question with the one in the original Time– Yankelovich, Skelly, and White survey of 1978. Late in the interview, after a long, complex, and nuanced set of questions about marriage, family life, and other topics, respondents were asked:

Q.52. “ What gives your life the mostmeaning–your work, your family, or your leisure?” [Emphasis mine]

So how does this make a difference in the results of the two surveys?

By providing respondents with a context that emphasizes the “growing variety in the types of family arrangements that people live in” [‘these days”] in the preceding question, the Pew poll implicitly suggests to respondents the meaning of the vague phrase “the present institution of marriage is becoming obsolete.” It essentially defines what is meant by “obsolete.”

Whereas the original Yankelovich, Skelly, and White survey posed the question in the context of what gives the respondent’s “life the most meaning”—to which the overwhelming majority (81%) said “family.” In this context, saying marriage is becoming obsolete would amount, for many, if not most, to saying family life is obsolete.

So a good chunk of the difference between the results of the 2010 Pew poll and the Yankelovich, Skelly, and White survey of 1978 on the obsolescence of marriage may well be due to a difference in the context in which the key question was asked.

And that’s not the only difference in how the two polls were done.

The original Yankelovich survey was based on a sample of registered voters, whereas the recent Pew poll  was based on sample of all adults. So why does this matter?

Registered voters tend to be better educated, older, whiter, Republican and more conservative than those who are not registered.

As the latest Time-Pew poll shows, the college-educated, older Americans, married people, men and whites are noticeably less likely than the less well educated and the unmarried, for example, to say that “the present institution of marriage is becoming obsolete.”

The recent Time-Pew poll, based on a nationwide survey of all adults—not just registered voters—was therefore more likely to include those with less sanguine views of the institution of marriage than the original Time-sponsored survey by Yankelovich, Skelly, and White, thus inflating the percentage saying it’s obsolete in 2010.

The latest Pew poll does report the results on the marriage question for both registered voters and their adult sample as a whole, showing that registered voters were somewhat less likely to say that the present institution of marriage is becoming obsolete (36 vs. 39) and that the differences between registered voters in 2010 and 1978 were not as dramatic (8%). 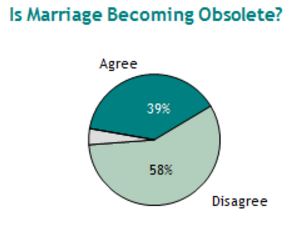 But Pew curiously omits the more relevant comparison in their 2010 survey between registered and non-registered voters, which would probably show a noticeable difference between them in the percent saying marriage is becoming obsolete.

That difference, plus the difference due to the context in which the questions were asked in 1978 and 2010, may well account for much of the sensationalized difference reported in the mass media—an actual difference of 11%.

Not to mention, in passing, differences between the two studies that could arise due to just sampling error of plus or minus 3%?

Far better for the press to round up the difference to 12% and put out attention grabbing headlines such as “Four in 10 say marriage is becoming obsolete.”

Makes much better copy, even if it’s mostly a mirage in my judgment. Don’t want to hear from any skeptics!

TIME-Pew Poll About End of Marriage Is Unsound