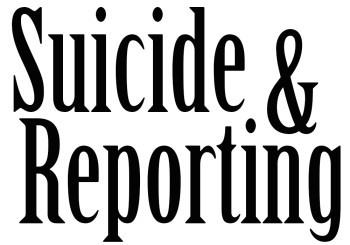 Suicide has been in the news cycle this week with the deaths of two teenagers who survived the Parkland High School shooting, Sydney Aiello and Calvin Desir, and Jeremy Richman, the father of one of the children killed in the Sandy Hook Elementary School shooting. All three died of apparent suicide.

In previous years and cases, we’ve seen some media outlets break suicide reporting guidelines with gratuitous, insensitive and invasive coverage. This week, iMediaEthics has seen news outlets getting it right, like the New York Times‘ article which sensitively reported on Richman’s death, highlighted his work, included contact information for people in need of help and didn’t feature graphic details.

The Atlanta Journal-Constitution explained to readers the serious issue of suicide contagion and how to help prevent it. And PBS educated readers and listeners that “how the way we talk about suicide can prevent it from happening again.”

If you see any problematic coverage of suicide, contact us at info@asrlab.org.

iMediaEthics has often covered the best practices for reporting on suicide. Because bad suicide coverage can trigger vulnerable people and even lead to copycat deaths, it is vital that news outlets produce responsible reporting.

Last year, the UK press regulator the Independent Press Standards Organisation issued guidance for reporting on suicide, noting that “the fact of someone’s death is not private,” but journalists should be careful in reporting on deaths by suicide. For example, journalists shouldn’t include “excessive detail” or say why someone is thought to have died by suicide. IPSO ruled against a UK newspaper last year for providing way too many details about a death by suicide. In another case, IPSO found a local newspaper called the Chronicle & Echo’s online story may have caused copycat deaths.

Also last year, the Australian press regulator the Australian Press Council ruled that a local news outlet broke guidelines for reporting on suicide with a story on a man’s threats. The press council also ruled against the Australian Daily Mail for including information about the method of an attempted suicide.

iMediaEthics also called out the New York Post‘s problematic coverage on Spade’s death. The Post included excessive detail and reported on her alleged note before death.

In 2017, iMediaEthics reported on New Jersey news site Redbankgreen for sensationalizing a death by suicide.

In 2016, iMediaEthics criticized Sharon, Pennsylvania newspaper the Sharon Herald for its insensitive, gratuitous coverage of a local man’s death. We also published a response from the man’s mother explaining how she wishes the newspaper had covered her son’s death.