Was Balding Heir to the Throne's Hair Photoshopped in Vanity Fair? 'We obvi

Was balding Heir to the Throne’s Hair Photoshopped in Vanity Fair? ‘We obviously did not add more hair’ to Prince William’ 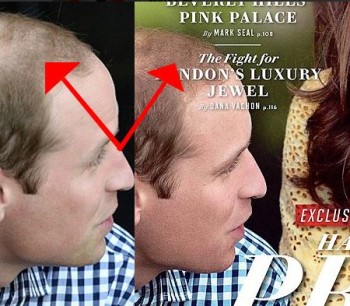 Vanity Fair has been accused of Photoshopping its cover image of Prince William, Kate Middleton and their baby, Prince George.

But, while Middleton has been the subject of photo doctoring before, this time, it’s Prince William the magazine reportedly doctored.

According to Cosmopolitan, it looks like Vanity Fair altered its cover image to give balding Prince William more hair.  It also “*totally* color-corrected Prince George and took the wrinkles out of his neck,” Cosmopolitan wrote.

The magazine’s cover image wasn’t from a photo shoot of the family. It was an April photo of the royal family while they were in Australia.

The Daily Mail published a side-by-side comparison of the original April picture and the version used on Vanity Fair‘s cover.

Vanity Fair says it didn’t doctor the picture though.

“We did not Photoshop the cover to make Prince William appear to have more hair,” a Vanity Fair spokesperson told the New York Daily News.

“We gave the image a poster-like palette. Because it is a cover image, the colours are richer and more graphic and vibrant. We obviously did not add more hair.

“His face, head and shoulders were just darkened as though he was a bit in the shadow… which put more emphasis on Prince George.”

The website Racked is credited as first raising concerns about the photo.

iMediaEthics has written to Vanity Fair for comment. We’ll update with additional information.

In 2012, Marie Claire South Africa doctored an image of Kate Middleton to put her in an African dress for its cover image.

The year before, the magazine Grazia doctored a photo of Middleton and Prince William on their wedding day to remove the prince.

Was balding Heir to the Throne’s Hair Photoshopped in Vanity Fair? ‘We obviously did not add more hair’ to Prince William’