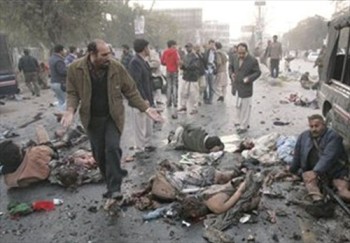 The dead and injured are seen after the attack that killed Pakistan's former Prime Minister Benazir Bhutto, in Rawalpindi, Pakistan, Thursday, Dec. 27, 2007. The scene depicts daylight, yet the AP "creation" time for this photo is 8:53 p.m., long after the 5:07 p.m. sundown, thus indicating the time stamp is in err. (AP Photo/B.K.Bangash)

Starting this month, our international news stories will be cross-posted on Pakistan’s Express Tribune, a partner of the International Herald Tribune. This is Part 4 of our special investigation on the Bhutto crime scene press coverage. See Part 1, Part 2 ,and  Part 3 of this investigation.

Pakistan’s former Prime Minister Benazir Bhutto was murdered at 5:16 p.m. in a suicide attack in Rawalpindi, Pakistan, on Thursday, Dec. 27, 2007. These facts are incontrovertible.

Why, then, are the historic crime scene photographs mistimed by the Associated Press (AP)? Absurdly, the images of the gruesome Bhutto crime scene are timed by the AP from 1:53 p.m. —  hours before the murder actually occurred — to 4:24 a.m. on Dec. 28, almost 24 hours after the ambush and bombing happened.

Although they appear sequential, four images in the AP archive indicate daylight spanning over seven hours — an impossibility since the attack occurred after sunset, 5:07 p.m. (GMT +5).

Worse than the erroneous times is AP’s continuing disregard for correcting these time distortions of Pakistan’s history that we flagged.

Starting in 2007, iMediaEthics (known then as StinkyJournalism.org), a not-for-profit media ethics news site, informed AP that its time stamps were terribly wrong. iediaEthics asked AP to explain why the time stamps on the Bhutto photos had gone wrong.

AP representatives initially promised to look into the caption and time stamps errors, but later said they could not be bothered and had other priorities. All we got were excuses.

Greg Payan, the assignments and production manager at AP was interviewed in 2007 by phone and said: “You can’t really use the creation date as the hard, fast rule as to the sequence of when the pictures are taken. I know that you can try to hang your hat on that, but because of the difficulties that I just mentioned with equipments in Pakistan and third world countries and a very chaotic scene. You have a time stamp that happens to be the camera and you’re hoping that it’s recording it actually, not to mention on a memory card. There’s a lot of things that could go wrong.”

Paul Colford, by email in 2007: “Dear Rhonda: Thanks for your E-mail. I have nothing further to add beyond what Greg has already told you. Sincerely, Paul Colford.”

So we pushed Colford harder.