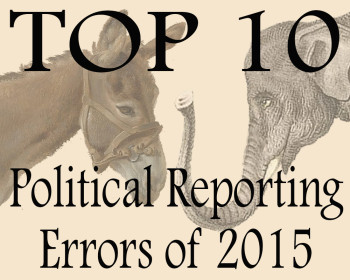 This year, there were so many glaring or entertaining corrections we had to divvy up our annual corrections lists in categories. Below check out iMediaEthics’ ten favorite political corrections of 2015.

The Washington Post mixed up sectarian and secular, which are basically opposites, when reporting on a speech by Pres. Obama at the White House Summit on Countering Violent Extremism.  The Post’s correction?  “Correction: An earlier version of this story incorrectly quoted President Obama as saying the world must address ‘secular conflict.’ He actually said ‘sectarian.’ The headline and first paragraphs of this version have been corrected.”

9. Obama’s not an assclown, either

Minnesota newspaper St. Paul Pioneer Press corrected after calling Pres. Obama an “assclown” in a photo caption from a February BuzzFeed video showing the president using a selfie stick. The caption writer told iMediaEthics he was really trying to mock people who take selfies, with a little “dig” at the president but misfired. The corrected caption changed assclown to celebrity.

8. Putin is NOT Jihadi John.

In March, CNN erroneously used the on-screen text “Reports: Jihadi John Identified” with a photo of Vladimir Putin, suggesting that Russia’s Putin was the man behind the ISIS mask. This aired when the world learned the identity of the British ISIS terrorist as Mohammed Emwazi, but before he was reportedly killed via a drone strike. CNN issued the following statement correcting the error: “Due to a failure of a video server during today’s breaking news broadcast, a photo of Vladimir Putin, prepared for our next report, was accidentally shown. We apologize for that mistake.”

7. Obama wasn’t suspected of sexual assault
President Barack Obama had a rough year in corrections-land. And this isn’t even the last Obama-related correction on our list.

San Diego TV news Fox 5 apologized after using a photo of Obama with the headline “no charges” during a February story on a sexual assault suspect who would not face prosecution. In an on-air apology, the station announced: “We have an apology now. Friday night at 10 o’clock, we inadvertently used a photo of President Obama while reporting on a story about charges being dropped in a local case. We regret the error.”

5. Romney isn’t running for president
In January, the Daily Beast trumped an exclusive report based on anonymous sources that Mitt Romney was throwing his hat in the ring  for the 2016 presidential election. But, Romney announced the same day as the Daily Beast report that he would not be running again. The Daily Beast admitted error, tweeting “we got it wrong.”

4. Joe Biden isn’t either
In October, the Washington Post published a pre-prepared story about Joe Biden announcing his candidacy for president. But Biden didn’t make that announcement, and later said he wouldn’t be running.  The Post told iMediaEthics: “Earlier tonight, a technical glitch occurred when video was being embedded into a story prepared in case of an announcement from Vice President Biden, inadvertently causing it to be published. The story was immediately pulled back down, and The Post regrets the error.”

“Correction: An earlier version of this story transposed the names of Prince Charles and Gerry Adams. This version has been corrected,” the correction reads.

1. Love Trump’s Hate, or Love trumps hate? An apostrophe makes all the difference.
The Globe and Mail produced the most amusing correction of the year when it showed that grammar really does matter. After Donald Trump suggested banning Muslims from entering the United States, Hillary Clinton tweeted “love trumps hate.” But by the time the tweet made it to the Globe and Mail‘s article, a simple apostrophe was added, changing the meaning of the phrase from saying love is greater than hate to suggesting people should love Donald Trump’s hate. The correction: “A Wednesday news story on Donald Trump incorrectly quoted a Hillary Clinton tweet as saying ‘Love Trump’s Hate.’ In fact, the tweet was ‘love trumps hate.”