Top 10 News Errors of the Year 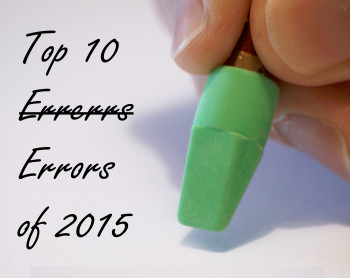 There was lots of fodder for our annual top 10 errors of the year list.  Below, see some of the slip-ups, mistakes and corrections from the year that left us scratching our heads.

10. Helloooo: The New York Times had a little fun last month with a lighthearted correction that played with the lyrics to Adele’s song “Hello.” The correction notes vowels that are held for the song, and reads: “An earlier version of this review misstated a song lyric. Adele sings “Hello from the other siiiiiide,” not “outsiiiiiide.”  [Adele’s “Hello” Lyrics]

9. Santa’s Dead?! Norway’s Aftenposten published a death notice for the one and only Santa Claus this month but later apologized for the false St. Nick claims. According to the newspaper, someone took out an ad featuring the news of Santa’s passing and funeral and it accidentally made it to publication. [RIP Santa]

8. Playstation 4 Planning Paris Attacks? ISIS terrorists didn’t use Playstation 4 to organize the November 13 attacks on Paris. Forbes falsely said that the terror raids in Belgium after the attacks on Paris turned up a Playstation 4 that was used to “discuss and plan attacks.” Forbes corrected, writing: “Correction: It has not been confirmed, as originally written, that a console was found as a result of specific Belgian terror raids. Minister [Jan] Jambon was speaking about tactics he knows ISIS to be using generally.” [Playstation 4 Not Found in Belgian Raids]

7. Check your conversions: The exchange rate isn’t that bad. The New York Times just needs to check its conversions. In January, a Times article about a sale at a Sotheby’s auction wrongly indicated that one British pound equates to $15 U.S. The article said £11 million is worth about $166 million. [1 British Pound isn’t $15 U.S.]

6. Zayn Malik isn’t in ISIS: Former One Direction boy band member Zayn Malik isn’t a member of terrorist group ISIS. The Huffington Post corrected in November after a photo of Malik accompanied a tweet with a story on ISIS, leading readers to believe so. The Huffington Post apologized in a tweet writing: “We apologize for the original image here. Zayn Malik is mentioned in the story, but is obviously not part of ISIS.” [Fmr One Direction member not a terrorist]

4. PETA didn’t complain about cursing at sheep: While PETA was upset with some sheep shearers in Australia earlier this year, it wasn’t mad that the shearers cursed at sheep. Several Australian and U.S. news outlets reported that PETA was mad about the sheep being verbally abused, but PETA actually alleged physical abuse including punching, hitting and throwing sheep. The Huffington Post published this correction: “CORRECTION: A previous version of this article stated that the complaint did not allege physical abuses on the part of the sheep shearers. PETA’s complaint did allege a number of such abuses, in addition to the verbal abuse.” [PETA complaint wasn’t over swearing at sheep]

3. Dylann Roof not a Brony: Dylann Roof, accused of shooting and killing nine in Charleston, South Carolina’s Emanuel AME Church this past June, is not a brony — a guy who likes the toys My Little Pony. The New York Times was duped by a hoaxer who made the false Roof claim to the Times. The Times later added this editor’s note: “An earlier version of this article included a reference to a British blogger who claimed that Dylann Roof’s manifesto was similar to earlier blog entries Mr. Roof had written. That passage was removed from the article after questions were raised about the blogger and his claims. Subsequently, the blogger said in a post online that he had fabricated the information about Mr. Roof’s supposed earlier blog entries.” [Dylann Roof not a My Little Pony Fan]

2. ISIS Bans Pigeon Breeding Because of Pigeon Genitals? This June story just sounded too weird to be true. The UK Mail claimed in a June 2 article that ISIS banned pigeon breeding because pigeon genitals are exposed. But the claims were based on a misunderstanding of an ISIS document. The correct translation of the ISIS document says ISIS is opposed to pigeon breeding because it can lead to snooping and invasion of privacy, but a literal, out-of-context translation led the Mail and other media to think it was because of pigeon genitals. [Pigeon Genitals not the reason for ISIS ban]

1. Yogi Berra died, not Yogi Bear: In September, the Associated Press made an amusing error in a news report about the death of baseball legend Yogi Berra: The AP said Yogi Bear, the cartoon character, died, not Berra. We never saw a correction from the AP on this one, but the error was noteworthy. [Yogi Berra Died, Not Yogi Bear: AP Makes A Boo Boo?]

Top 10 News Errors of the Year