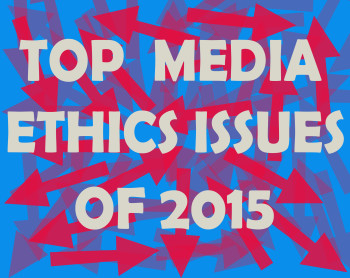 It’s been a busy news year, and from the perspective of media ethics, there has been a lot to cover. Below, read iMediaEthics list of the top 10 media ethics issues of 2015. (For reference, here’s last year’s list!)

Donald Trump — and covering Donald Trump — have been major topics since the Republican real estate magnate announced he was running for president in the middle of June.

There were accusations of staged or faked photos, memos on whether to call Trump racist (or not), the ending of Trump’s weekly appearances on Fox News’ Fox and Friends’ over his candidacy, an epic correction, and Trump losing his relationship with NBC (which airs Celebrity Apprentice, a reality television show that he hosted) over his comments on immigration. An Atlanta radio station fired a host for airing an old interview with Donald Trump and claiming it was new, and then there were problematic polls.

With so many mass shootings this year, the ethics of reporting on those shootings and attacks came in the forefront. Specifically — what’s fair game in reporting on suspects? In February, a man was accused of murdering his neighbors in Chapel Hill, North Carolina. The media, as usual, then tried to dig into the background of the accused to learn more about him. In the Chapel Hill shootings, it went to a different level, as the news site the Daily Dot then reported on what it thought was the suspect’s Amazon.com Wishlist page.

With the so-called Cannibal Cop in New York City, Gilberto Valle, the New York Post reported on a Match.com profile that appeared to belong to the former police officer.

More recently and more high-profile, members of the media went into the apartment of accused San Bernardino shooters Tashfeen Malik and Syed Farook while on live TV. MSNBC apologized for going too far and showing unconfirmed and private information on television, like the license of Farook’s mother and photos of unidentified people.

Standards of media polling have been a hot topic this year with Gallup deciding not to poll on the presidential primaries and various media outlets misinterpreting or mis-reporting poll results. See here and here and here.

The UK Sun generated more than 2,500 complaints when it misinterpreted a poll to falsely say that 1 in 5 British Muslims sympathized with ISIS. The complaints were the most ever sent to UK print regulator the Independent Standards Organisation (IPSO). The Sun stood by its report even though the poll actually didn’t say that 1 in 5 British Muslims sympathized with ISIS. Sister newspaper the Times of London published a correction. Survation, the polling  company that conducted the poll for the Sun, criticized the Sun‘s interpretation of the poll, saying it doesn’t “support or endorse the way in which this poll’s findings have been interpreted.”

The Sun poll wasn’t alone. iMediaEthics’ polling director David Moore found “what appear to be deliberate misinterpretations of polling results” this fall to fear-monger about Muslims’ views of ISIS.  In another polling-related story, major news media outlets reported on a survey from England that reportedly showed 1 in 3 vegetarians eat meat when drunk. But, did any media actually see the survey?

iMediaEthics commissioned its own poll this summer to fact check media poll reports on the Iran nuclear deal and discovered as many as two of three Americans didn’t have  an opinion on the deal, and three of four didn’t know what the deal was.

This year, we also saw CNN cherry pick the results from its March poll to say Hillary Clinton was hurt by her e-mails, dueling polls on whether Benjamin Netanyahu should have spoken to Congress, and questions about “What’s the Matter with Polling?”

7. Where is the Line when Reporting on Religion?

The year started with numerous news outlets making the decision of whether to publish images and cartoons from Charlie Hebdo after the French satirical magazine was attacked.

Fox News got in trouble with its wrong claims back in January that parts of Europe have “no-go zones” that are under Sharia law and where police and non-Muslims don’t go.

Curt Schilling, a retired Major League Baseball pitcher, was suspended from ESPN after comparing Muslims to Nazis in a tweet.

The New York Times published a photo that depicted Pope Benedict XVI made of condoms this summer, but didn’t publish controversial images of Muhammad from Charlie Hebdo. The Times argued the Pope picture was artwork that people weren’t super upset about.

6. And what about reporting on refugees?

In November, CNN suspended correspondent Elise Labott for a tweet saying the “Statue of Liberty bows head in anguish” after the U.S. House of Representatives voted to make it harder for Syrian refugees to enter the U.S.

The Daily Mail‘s cartoon on refugees, showing a woman in a hijab, men with big noses and rats crossing the border into Europe, prompted complaints that the cartoon evoked Nazi-era propaganda.

Hungary’s N1TV fired camerawoman Petra Laszlo after she was caught on camera kicking and tripping refugees trying to leave a refugee camp.

The refugee crisis this summer also prompted discussions about what the proper term is — refugee or migrant.

In September, there was the debate over using images of a dead Syrian child, Aylan or Alan Kurdi. The child was pictured washed up on a Turkish beach or being carried by officials. Many news outlets used photos of the young boy, despite its graphic and upsetting nature because of its newsworthiness.

Williams apologized in early February after saying on air he was in a helicopter in 2003 that was shot down in Iraq.  A veteran called Williams out for the lie — Williams was on the helicopter AFTER the one shot down. Williams apologized on Facebook and on air and announced a brief self-imposed suspension. Then NBC News suspended Williams for six months in February while it continued an investigation into his claims.

In June, NBC News announced Williams would be replaced as Nightly News anchor by Lester Holt and that Williams would be covering breaking news and special reports. His first appearance on MSNBC was in September to cover Pope Francis’ arrival in the United States.

In a June interview with NBC’s Matt Lauer, Williams blamed his ego for the fabrications and apologized. “I said things that were wrong. I told stories that were wrong. It wasn’t from a place where I was trying to use my job and title to mislead,” Williams said. “These were…in some cases years after the event and in many different areas, live discussions, talk shows, discussions with students. I got it wrong.”

What is OK in reporting on ongoing or recent attacks?

The news media was reminded of those questions about where the line is in breaking news just this month. In December, MSNBC and other news outlets rushed into the apartment of accused San Bernardino shooters Syed Farook and Tashfeen Malik, going through the apartment on live video. MSNBC showed the driver’s license of Farook’s mother close-up, as well as various photos of unidentified people. MSNBC later apologized for showing the driver’s license.

By the end of last year, Rolling Stone‘s November report “A Rape on Campus” that alleged gang rape at a campus fraternity house was discredited. But this year, the impact of that problematic reporting hit: Rolling Stone was hit with lawsuits from the fraternity in question, Phi Kappa Phi, a university official and a few students.

Columbia University’s Graduate School of Journalism finished its review into the Rolling Stone story by Sabrina Rubin Erderly. It called it a “story of journalistic failure.” Rolling Stone then formally retracted the article.

2. Wind-down of the Phone Hacking Scandal

If 2011 was the year the phone hacking scandal in the UK hit its breaking point, 2015 has been the wind-down. Just this month, the UK Crown Prosecution Service announced it was done investigating phone hacking at the newspapers owned by News Corp UK and Trinity Mirror. Rebekah Brooks, who resigned as CEO of News Corp’s News International back in 2011, was rehired by News Corp. in the UK.

In April, the Crown Prosecution Services dropped nine of its twelve outstanding cases against journalists for paying public officials.

In February, Trinity Mirror, which owns the Sunday and Daily Mirror and The People, apologized publicly to victims of phone hacking.

Many significant errors or issues popped up this year in reporting on ISIS, the jihadist militant group.

Several news outlets, including the New York Post and Daily Mail, published a photo of the wrong woman in reporting on the attacks in Paris in November.  Instead of using a photo of  Hasna Ait Boulahcen, who died in the Nov. 18 raids in Saint-Denis, the media used photos of an unrelated woman, Nabila Bakkatha, in a bubble bath.

In April, the UK Mail used a photo that allegedly showed a recent ISIS execution, but it turns out that the photo was first published back in 2014, so it wasn’t deleted.

After the crash of Russia’s MetroJet airliner in Egypt, Vladimir Putin didn’t say “To forgive the terrorists is up to God but to send them to him is up to me.” Regardless, that false quote was attributed to the Russian President.

Earlier this year, Fox News decided to publish a 22-minute ISIS video of ISIS burning a Jordanian pilot, Muath al-Kaseabeh, to death. Fox News argued it was newsworthy and that viewers were warned. On the other hand, CNN didn’t run the video.

In the spring, media outlets misinterpreted an ISIS document and falsely said the jihadist militant group banned pigeon breeding because it was offensive to see birds’ genitals. In reality, the ISIS document said that the group didn’t like pigeon breeding because it could lead to invasion of privacy, since pigeons are kept on roofs, and breeders could snoop on neighbors.

In November, a Canadian Sikh man, Veerender Jubbal, was falsely linked to the terror attacks in Paris when a selfie he took was Photoshopped to add a suicide vest and Koran. Spanish newspaper La Razon apologized after publishing the fake photo on its front page.

As noted earlier in this list, The Sun stirred controversy with its November report saying a recent poll found 1 in 5 Muslims sympathizes with ISIS. Problem is, the poll didn’t say that.